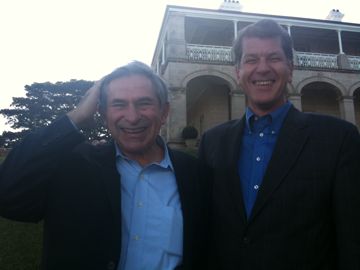 (photo of Paul Wolfowitz and Steve Clemons at Australian Prime Minister’s Official Residence in Sydney — Kirribilli House, 16 August 2009. When taken, Paul Wolfowitz remarked, “I don’t know whose reputation will take more of a hit for this picture — yours or mine. . .”
Paul Wolfowitz penned a provocative critique of foreign policy realism in this week’s Foreign Policy magazine.
Four responses to Wolfowitz were posted online last night in a series called “Is Paul Wolfowitz for Real?”

Stephen Walt, “Just Because He Walks Like a Realist. . .”
David J. Rothkopf, “A Neocon in Realist’s Clothing”

Daniel W. Drezner, “Capitalization Matters”
Steve Clemons, “Failing to Note the Difference When the U.S. Power Tank Is Full or Near Empty“

Look forward to hearing thoughts of others on this discussion.
I will be at Waldens Coffeehouse in Reno, Nevada this morning.
— Steve Clemons