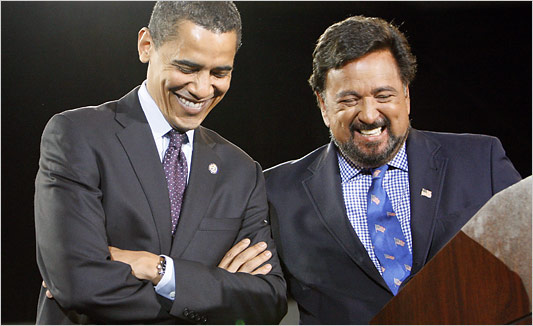 Patrick Doherty directs the New America Foundation/U.S.-Cuba 21st Century Policy Initiative. This post originally appeared at The Havana Note.
Governor Bill Richardson is visiting Cuba on a trade mission for his state this week. In an AP story filed yesterday, Richardson announced that he would report on his trip to President Barack Obama, but that he was not on a mission and carried no message from Washington.
When Richardson reports, Obama should recruit. President Obama should offer this former U.S. Ambassador to the United Nations, former Secretary of Energy, and former member of Congress a role as the point person for the Obama administration’s Cuba policy. It is a perfect opportunity at a perfect time.
First, he’s got the chops. “Rogue-state” Richardson built his diplomatic reputation on negotiating with authoritarian regimes to secure U.S. interests. He successfully negotiated with Saddam Hussein, Slobodan Milosevic, Kim Jong-Il, and Omar al-Bashir. All of those countries exported nuclear weapons, invaded their neighbors and/or committed crimes against humanity. By contrast, the Castro government, now exporting doctors and nurses, nickel, tobacco, rum and tanned tourists, is tame.
He’s also got ‘street cred’ in DC. Mr. Richardson was the head of the Congressional Hispanic Caucus and Deputy Majority Whip. He is also a border-state governor, an agricultural state governor, and the only Hispanic state governor. All of these credentials are essential to being able to make the case within the administration, within Congress, and with the American people that the time to evolve our relations with Cuba is now.
The Governor is no liberal idealist, but has deep realist roots. He began his career in Washington working as a Congressional liaison for Secretary of State Henry Kissinger in the Nixon Administration. After leaving office as Secretary of Energy and before becoming Governor, he joined his old boss at Kissinger McLarty Associates. He sat on the boards of Valero Energy and Diamond Offshore Drilling, giving him a keen understanding of the energy dynamics at play in today’s U.S.-Cuba relationship. With that experience, he’ll keep a keen eye on the broader U.S. interests at play in Cuba policy rather than those of a small minority of irreconcilable Cuban-Americans.
The Richardson choice would finesse significant bureaucratic deadlock. By picking Richardson and giving him autonomy over his team, President Obama would avoid the web of entanglements built into the State Department bureaucracy. Though career officials, the Cuba desk at State is watched like a hawk by Congressional Cuba Hawks opposed to any efforts to change the 50-year old policy. President Obama does not even have an assistant secretary of state for Western Hemisphere Affairs yet, as his nomination has yet to be voted on by the Senate. It is even doubtful that Secretary of State Clinton, who needs to remain close to Senator Menendez to keep her department’s funding intact, has any real interest in putting Cuba on her geopolitical to-do list. It’s high time that a president took a page out of Nixon’s playbook and did an end run around Foggy Bottom to finally get the Cuba relationship where it should be.
As Envoy, Richardson would be immediately backed by a broad array of domestic support. In Congress, without much effort or fanfare, 160 members in the House and 31 members in the Senate are already cosponsoring legislation to end the travel ban. Former Southern Command CINCs like General Barry McCaffrey and a broad array of groups including the Catholic Church, the American Farm Bureau, Amnesty International, and Human Rights Watch, have come out in favor of changing the policy. Even a majority of Cuban Americans polled in Florida are also ready for a change. And for good reason: the policy failed, contact with everyday Americans and normal trade relations is more effective, and at least the ag sector really stands to benefit, with an estimated $1.2 billion in annual farm sales to Cuba coming from normalization. The world would back him too: last year it voted 185-3 to condemn the U.S. embargo.
The governor could even work part time. Obama’s envoy to the Six Party Talks with North Korea, Ambassador Bosworth, has kept his day job as dean of the Fletcher School (Richardson’s and this author’s alma mater). It might not even take that long. Raul Castro has indicated his willingness to talk, migration talks have already been productive and the Cuban government is signalling to everyone that political prisoners, Obama’s key precondition, are doable.
And the timing could not be better. President Obama’s honeymoon has been ended by the health care debate and climate change legislation is looking equally difficult. While his reversal of the worst excesses of the Bush administration were a relief, he has yet to deliver the kind of change that the rest of the world expected from candidate Obama. In Latin America, where immigration, energy, and trade issues have great impact on the lives of every day Americans, the neighbors are unanimous: end the embargo and then we’ll turn the page. Obama needs a win and Cuba can give it to him.
Richardson’s visit along with his clean bill of legal health, is a gift. The White House should accept it and make Bill Richardson him the presidential envoy to Cuba.
— Patrick Doherty