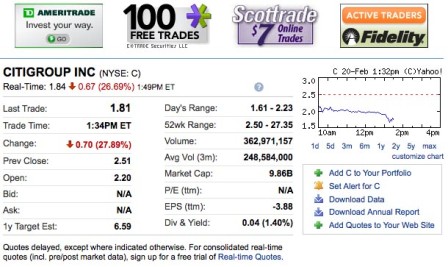 Senator Chris Dodd may have just pulled a Hillary Clinton. . .
Like Clinton who just sent the media into a tizzy by referring to North Korea’s leadership succession struggles and thus prompting a mad dash to understand whether she was now looking beyond Kim Jong Il or encouraging a coup, Senator Dodd has caused ripple effects with his comments about possibly nationalizing Citibank and Bank of America.
This from a Bloomberg report on Dodd’s interview with Al Hunt:

Christopher Dodd said it may be necessary to nationalize some banks for a short time as Citigroup Inc. and Bank of America Corp. tumbled today on concern the U.S. may take over both banks.
“I don’t welcome that at all, but I could see how it’s possible it may happen,” Dodd said in an interview on Bloomberg Television’s “Political Capital with Al Hunt” to be broadcast later today. “I’m concerned that we may end up having to do that, at least for a short time.”

I just withdrew some cash from Citibank and plopped it into my credit union account. I’m under the FDIC insurance limits, but still, do I really want a lot of assets caught up in a bank about to be nationalized?
No. And I should have withdrawn the money anyway when I saw that Robert Rubin had received more than $100 million for “consulting.”
As I write this, Citibank is at $1.68 a share, down 30%.
Bank of America is at $2.53, down 35%.
If Hillary Clinton wants a coup in North Korea or hopes to derail the Six Party Talks, then her comments were on target.
But if Chris Dodd, an otherwise great guy, wants to help stabilize markets and build confidence in whatever it is the administration is trying to do, he should either just nationalize the banks — or not.
But don’t publicly flirt with the idea of doing so.
— Steve Clemons