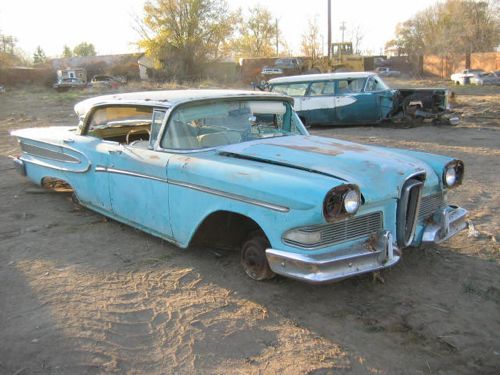 Latin America policy uber diva Julia Sweig chaired a news-making gathering at the Council on Foreign Relations in Washington yesterday morning. It was excellent, and the CFR has audio of the entire event here.
In response to a question I posed to Sweig’s panel, Obama administration Summit of the Americas point man Jeffrey Davidow fell back on droopy anachronisms while Foreign Policy magazine blogger and best-selling writer and geostrategic interpreter David Rothkopf hit the ball out of the park with his statement: 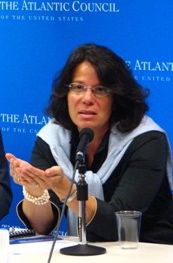 The full line-up on Sweig’s panel included Jeffrey Davidow, White House Adviser for the Summit of the Americas and former US Ambassador to Mexico; Luis Alberto Moreno, President of the Inter-American Development Bank; and David J. Rothkopf, President and CEO, Garten Rothkopf and visiting fellow at the Carnegie Endowment for International Peace.

The Summit of the Americas, which President Obama is attending, will convene in Trinidad & Tobago from April 17-19.
After Davidow successfully avoided mentioning the word “Cuba” in his primary remarks on the Obama administration’s game plan for the Summit of the Americas, the former US Ambassador to Mexico finally offered in his penultimate exhale an acknowledgement that “Cuba might come up” in the meeting.
And then he finished stating that other “flamboyant personalities may ‘flambay'” — a clear nod to Venezuelan President Hugo Chavez.
When I had a chance to pose a question, I pressed Davidow pretty hard on what he tried to avoid.
The exchange between Ambassador Davidow, David Rothkopf, and myself follows below.
What is interesting and disconcerting is that Barack Obama’s point guy on this upcoming Summit gave the unreconstructed, neoconservative-friendly, ideologically vapid, ‘unchastened by five decades of embargo failure’ answer to my question on Cuba.
Has Obama read the brief that his people are preparing for him on Cuba?
Davidow embraced one of the worst single editorials I have read in years in the Washington Post titled “Coddling Cuba.”
And Rothkopf did his part to say that on US-Cuba policy, the American position has no clothes — and has become completely illegitimate in the eyes of the world and undermines America’s own, parochial national interests.
Here is the exchange in full between Sweig, Davidow, Rothkopf, and myself: 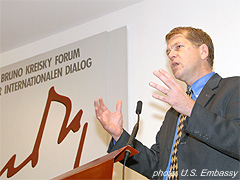 STEVE CLEMONS, Director, American Strategy Program, New America Foundation and Publisher, The Washington Note
I would like to just start with what David Rothkopf said about the Cuban embargo, “the beginning of the end” and ask Ambassador Davidow if you would agree with David’s perspective on that, or perhaps his assertion.
It’s very odd right now when one looks at Senator Richard Lugar and his statements on Cuba that seem to be running politically left of the President. Brent Scowcroft has said recently that Cuba makes no sense at all as a foreign policy problem. Russia’s lack of patronage of Cuba has shown that we can’t starve Cuba.
So, part of the question is if Barack Obama is the change agent he said, is Cuba more than Cuba? Is it a place where the steps you take there are so symbolic that they can have echo effects geostrategically on other parts of the world?
Or are we leaving this in the same arena where Senator Martinez and others would like to have it which is we are going to create opportunities for a class of ethnic Americans but not look at the broader geostrategic equation?
JULIA SWEIG, Nelson and David Rockefeller Senior Fellow for Latin America Studies and Director for Latin America Studies, Council on Foreign Relations
Ambassador Davidow? It’s the “four letter word” – not Peru – that you are asked to address now. 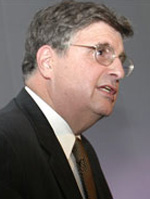 AMBASSADOR JEFFREY DAVIDOW, White House Adviser for the Summit of the Americas
I will try to answer that question. . .
JULIA SWEIG, Nelson and David Rockefeller Senior Fellow for Latin America Studies and Director for Latin America Studies, Council on Foreign Relations
And other panelists can chime in . . .
AMBASSADOR JEFFREY DAVIDOW
Yes, why don’t they!
Look it’s obviously a highly contentious issue. From my perspective, a few points to make.
From my perspective, I think it would be unfortunate to lose the opportunity for this hemisphere, at the beginning of the Obama administration, to set down some guidelines and make some progress jointly by getting distracted by the Cuban issue.
Cuba is not an issue for discussion at the Summit if one reads the Summit declaration and the documents on all the past year of negotiation. However, having said that, and given what we are reading in the press, it is probable that it will come up in some way.
The one point that I would respond to in Steve’s question specifically is, “Is Cuba something larger than itself?” and the answer is ‘yes, it is’.
And I think that whatever the reasons have been in the 1960s for initiation of elements of our Cuban policy, the fact is in today’s Hemisphere, Cuba is the odd man out.
Keep in mind that this meeting in Trinidad is a meeting of 34 democratic states.
If we had been talking about a meeting of the hemisphere as little as twenty years ago, it would have been cast in a different light.
There has been a remarkable historical transformation in this hemisphere, and a laudable one, toward democratically elected governments.
We may have difficulty with some of the governments that have been democratically elected, of course, but this Summit is a reunion of countries and presidents, every one of which has been elected by their populations.
There is not one government represented at this Summit whose population would willingly accept the kind of restrictions on their civil, political and human rights that are commonplace in Cuba – and that remain commonplace.
So, I think as we talk about Cuba and talk about how we as a government deal with it and so forth, let’s keep in mind that it is something larger than itself, it is in a way a memory of that which existed in the past and a caution of what may exist in the future unless we are totally committed to the question of democracy, human rights and representation of people.
And lest you think, and I’m sure some of you do, that I am some sort of ideologue on this, take a look at the lead editorial in today’s Washington Post. Maybe you think they are a bunch of ideologues as well, but I think they say it much better than I do.
So, we have been struggling with Cuba as a nation for close to half a century and there is a real focus on what we should be doing, but to answer the question, it is an important place beyond a small island 90 miles off our shore 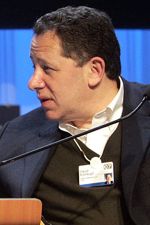 DAVID J. ROTHKOPF, President and CEO, Garten Rothkopf
If I may make a couple of brief comments on this- and I am unconstrained by affiliation with the United States government right now – so perhaps they will be in a slightly different direction.
The editorial in today’s Washington Post was absurd.
The position of the Florida contingent on this is Paleolithic.
The policy is indefensible on any grounds,
The reality is that Cuba may be special, but you have to ask yourself why it’s therefore easier to travel to or do business with the Stalinist, nuclear weapon-toting North Koreans, or whether it’s more comfortable for us to be totally economically integrated with the Saudi royal family and their depredations, or if we are concerned about human rights, why are we so integrated with and why are we the sole supporter of a government in Afghanistan that has just made rape in marriage legal and denies women the right to go outside without the approval of their husbands?
So this notion that some how democracy alone is the only criteria that we should use in defining the nature of relationship doesn’t stand up to any scrutiny whatsoever, and the reality is that only one country that has successfully been isolated by this fifty year embargo, and that is the United States of America.
Our [US-Cuba] policy dates back to the Edsel.
It is the Edsel of American foreign policy.
[END]

David Rothkopf is absolutely right.
Barack Obama has given few indications thus far that he is willing to move a five decade failed relationship forward in a meaningful sense — with the single exception that he may ironically codify “relaxation” for a class of ethnic Americans in a way that crudely discriminates against all other Americans.
We did not open Vietnam by relaxing travel and remittances for Vietnamese-Americans.
And Obama’s team — for all of the ballyhoo about democracy promotion — is promoting a policy of the United States government that restricts the American right of free travel anywhere.
I thought that we lived in a real democracy — and that it was supposed to be Communist governments — not democracies — that restricted the travel rights of their citizens.
President Obama is a busy man, but he better take a look at the brief that his team is preparing for him — otherwise he’ll learn too late that he’s driving “an Edsel” to the Summit of the Americas.
— Steve Clemons