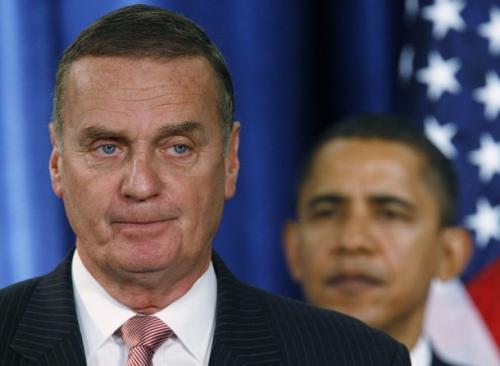 I am here in London where I’m participating in an interesting forum sponsored by the Princeton Project on National Security and the Royal United Services Institute (RUSI) Transatlantic Program, I’ve received not just one email — but three — from prominent insider journalists and policy hands that Jim Jones’ tenure as National Security Adviser is highly fragile.
One of these emails reports starkly:

That’s all my contact said. But other emails have intimated to me a serious tone-deafness by Jones about his role and responsibilities, his relationship with the President, and his relationship with younger, dedicated, hardworking and late-working staff. Jones recently said that National Security Council staff members that stayed longer than 7:30 pm must be disorganized in their work.
I speak to various NSC officials — often at 10:00 or 11:00 pm at night. They are hardworking, racing as fast as they can to manage the many, many, many major initiatives that Barack Obama has decided to simultaneously pursue.
James Jones is considered by his admirers to be a genius when thinking about management structures and decision-making processes. On the other hand, his critics see him as a plodding, slow-moving, out of touch retired general who was better prepared to think about the last era rather than the one we are moving into. His critics think that he’s just too unable to animate nimble, high flex policy decision making products for a White House on a manic dash to get a lot of top tier issues dealt with.
Friends at the National Security Council respect a great deal the way in which NSC Deputy Tom Donilon is managing his brief. Many see him picking up the load that Jones seems unable or unwilling to carry. Donilon is deeply engaged in the broad Middle East and Iran portfolio, the non-proliferation/WMD/arms control portfolio, the China economic and security portfolio, and he has — according to reports — supported and helped cultivate relationship building between State, DoD, the NSC, and other parts of the national security bureaucracy.
Some tell me that James Jones decided to try and remove himself from the “whack-a-mole” crisis reaction style of decision-making that could rob the Obama administration of the chance to define a new course in national security affairs. Tom Donilon, according to reports, wields far more the hand of power when it comes to day to day management and responding to crises that require presidential attention and response.
Jones, in contrast, has been obsessed with the structure of decisions — who is involved in those decisions, what the structure of decision-making should be, and what legal modifications to this process need to be made. He looks at that as the big nut that needs to be cracked — and that would improve, according to Jim Jones, the President’s effectiveness and chances of success at a macro level.
Jones’ self-determined task is not high profile, mostly structural, and has not won him many admirers for leadership — but what he is doing is necessary. If he departs his role, this challenge of dealing with the growing complexity of national security threats and the vital need to recalibrate the policy making and decision-making process will require the attention of someone serious.
So, whether Jones stays or goes — his portfolio will remain vital.
But what is clear is that Jones has enemies and that they are trying to undermine his place in the Obama orbit.
Their motives may not be earnest concern about the tempo or pace of Jones’ management style — but they very well could be his unwillingness to allow the liberal interventionists inside the Obama administration to have more than their fair share of power in the Obama decision-making process.
Jones has structured an all views on the table approach to decision making — quite evident when it comes to Middle East policy — and the hawkish/neocon-friendly/Likudist-hugging part of the Obama administration’s foreign policy operation may be engaged in a coup attempt against Jones.
I don’t know if he’ll survive this latest effort to oust him — but folks need to know that those “longer knives”, on the whole, do not have pure motives.
— Steve Clemons

The Real Saudi Southern Dance
Will There Be An “Obama Effect” in Iran??

22 comments on “Can James Jones Survive a Second Round of Attacks and “Longer Knives”?”