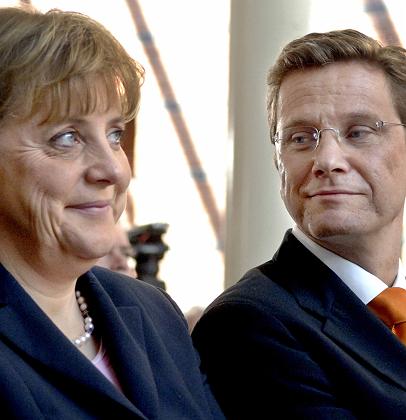 German exit poll results are in.
Looks like Germany may have its first out gay German Foreign Minister in Guido Westerwelle, who I think will do an excellent job in the role. Can’t wait until he meets Iran’s President Ahmadinejad in his official duties.
The CDU and FDP will have 320 seats together in a Black Yellow coalition, and they may actually have 324 seats given the peculiarities of the German election system of adding seats to the Parliament because of what are called overhang seats.
The approximate results in % terms are CDU 33.5%, SPD 22.5%, FDP 15.0%, Linke 12.5%, Greens 10.5%, Pirates 2.0%, Other parties 4%
That’s right. Pirates. These are the anti party political party who generally oppose government. 2.0%
But the change factor is important and fascinating.
The Social Democrats have fallen 11.7%. The CDU under Merkel has fallen only 1.7%.
The FDP has surged 5.2% since last elections, and the Greens are up 2.4% while the former Communists Linke Party is also up 3.8%. And the Pirates were at zero last time and are now up 2.0% in the strange collectiveÃƒÂ¤s debut.
The Grand Coalition is over.
Steve Clemons

Guest Post by Lawrence Wilkerson: Another Side of Richard Bruce Cheney
Today is the Day: Battle for the Bundestag