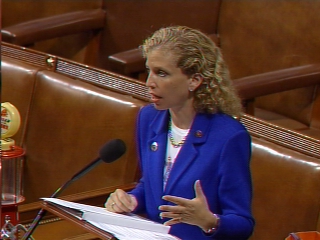 Wearing blue is sometimes just not enough.
I hug a lot of Republicans — particularly today’s “dissident Republicans in foreign and economic policy”, and there are some Dems I won’t go near — and the flip is true. I hug a lot of Democrats, and there are a lot of Republicans I won’t go near. That’s part of the reason why I am a registered Independent today and won’t unconditionally support either party.
But Debbie Wasserman Schultz (D-FL-20), a Co-Chair of the Democratic Congressional Campaign Committee (DCCC) Red to Blue Program, has many up in arms because of the Republican-hugging she is doing in South Florida to the detriment of her own party and her own stature as a significant force in Democratic politics.

For the record, I do think that there are some cases where helping a moderate Republican makes a great deal of sense — and I’m fully aware of the avalanche of email I will now get calling this view naive. I have supported the work and efforts of such Republicans in the past as Jim Kolbe, Steve Gunderson, Chuck Hagel, Richard Lugar, Lamar Alexander, Jeff Flake, David Dreier, Pete Domenici, John Warner, Jon Huntsman, and many, many others — even John McCain. I admire Robert Zoellick, Robert Kimmitt, Brent Scowcroft, Edward Djerejian, Carla Hills and hundreds and hundreds of other leading Republicans.
But the Republicans that Debbie Wasserman Schultz is hugging tightly are three Members of Congress who have actually had the power to make the Cold War colder in a small area of the world off of the U.S. border — Cuba. They have thrived despite the phenomenal failure of the US embargo of Cuba and have succeeded in keeping a more serious interest-driven US foreign policy toward Cuba from ever taking hold.
Two of the Congressman that Debbie Wasserman Schultz wants to protect are brothers — Lincoln Diaz-Balart (R-FL-21) and Mario Diaz-Balart (R-FL-25). They are nephews by marriage (ended by divorce) of Fidel Castro himself. They are the sons of the former Speaker of the House in Cuba during the tenure of US-friendly dictator Fulgencio Batista. Knowing them and their family history gives one insights into the unique and bizarre family feud that the US-Cuba policy standoff is really about.
Debbie Wasserman Schultz seemingly turns a blind eye to the suspension of justice, the nepotism, and the corruption that have surrounded the Miami side of the US-Cuba policy feud. Ileana Ros-Lehtinen (R-FL-18) has helped protect and then celebrate the achievements of Cuban-American terrorists — particularly Orlando Bosch and Luis Posada — in both Florida and in her Congressional role in Washington. It is truly shocking to read what Members of the US House of Representatives have been complicit in as told in the disturbing chronicle of the underbelly of US-Cuba relations, “Twilight of the Assassins,” by Ann Louise Bardach that ran in November 2006 in the Atlantic Monthly.
The involvement of the Diaz-Balart brothers and Ros-Lehtinen in outrageous perversions of legal justice should give anyone pause — but Red-to-Blue Co-Chairman Debbie Wasserman Schultz hugs them as tightly as she can.
Either Congresswoman Wasserman Schultz does not read, is ignorant of the background and activities of these three Republican congressman, or she is complicit. Which is it?
An intrepid blogger and constituent of the Congresswoman wrote this about his encounter with Schultz recently:

. . .While leaving the site of the luncheon, my friend and I spotted Rep. Wasserman Schultz and her aide waiting for their car, and so, unwilling to let this opportunity pass, I approached the congresswoman, introduced myself in my “meatspace” identity, and identified myself as a blogger with a tremendous amount of respect for her voting record and her performance in Congress on behalf of Florida. However, I continued, “is it not counter to your responsibilities as co-chair of the Red-to-Blue program in the DCCC to openly refuse to support the Democratic candidates who oppose Ileana Ros-Lehtinen and the Diaz-Balart brothers in Miami?”
. . .Rep. Wasserman Schultz told me that she has raised money actively as co-chair of Red-to-Blue on behalf of candidates all over the country. Indeed, she said, she expended a tremendous amount of political capital in Washington and in Florida to help get Ron Klein elected in 2006.
Now, in 2008, she has had to deal with the “difficult position” of being in charge of the DCCC effort but also being friends with the three Republicans in Miami — “I’m especially close to Mario [Diaz-Balart],” she said, “since our days in the state legislature, but I count all [three] of them as friends.” And so, while the congresswoman believes the Democratic candidates in those districts — Annette Taddeo, Joe Garcia, and Raul Martinez (for whom she said she actually has worked in his race against Lincoln Diaz-Balart) — are strong, she “just can’t cross that line personally” to campaign actively against her friends. It would be too hard to criticize them. . .

This essay by National Security Archives Senior Fellow Peter Kornbluh and Center for Democracy in the Americas Executive Director Sarah Stephens, “The Terrorists Among Us,” is really about the nurturing of a strain of virulent military activity inside the United States directed at a foreign government that is not fully subject to the monopoly of control any modern and responsible state should maintain.
Ros-Lehtinen, the Diaz-Balart brothers, and Wasserman Schultz help coddle and protect militants who train and have weapons caches that they hope might be used to eventually invade or attack Cuba with. They are not part of the Department of Defense or the system of national security of the US — and are in a way similar to a home-grown version of Hezbollah — and Wasserman Schultz should not expect the spotlight of the Democratic Party or of the nation as a large to go away unless she modifies her own behavior and direction.
— Steve Clemons

14 comments on “A Republican-Hugging Debate: The Sins of Debbie Wasserman Schultz”