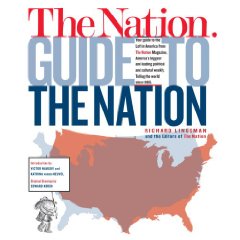 I don’t think that Barack Obama’s election signifies the coming of a new liberal era any more than I think the United States was a center-right country during the majority of the Bush years. But it doesn’t matter what I think. It’s more significant that there’s a widespread perception that American attitudes — and perhaps even “American culture” — have changed fundamentally over the past six months.
Interestingly, Random House and The Nation are banking on this change in their marketing strategy for The Nation’s Guide to the Nation, a guidebook to liberal America that they released yesterday. When it comes to divining how political attitudes affect book sales, Random House and The Nation are about as authoritative a partnership as we’ll ever find and, through their marketing materials, they’ve given us a window into their thinking. Whether or not they actually believe liberalism is on the march, they’re pretty sure that marketing to emboldened liberals is the way to sell books.
It’s pretty clear that six months ago, they believed liberals were feeling demoralized and isolated. The July 18 promotion letter from Vintage Books, part of the RH company, begins:

“Are you in need of a strong drink after the Bush presidency? Unfortunately, I can’t mail you a vodka gimlet, but instead, the book that accompanies this letter offers suggestions for a progressively-leaning pub in your area.”

The post-election promotion flyer tells a different story. It opens with a montage of pictures with the text “Helping you find your way in this new age of liberalism” front and center. Page 3 is pretty clearly a revision of the July 18 promotion letter, but it reads:

“Ready to celebrate the election of Barack Obama? Why not give a toast at the left-leaning bar in your area?Or maybe you’d prefer a cup of coffee from the local cafe where they serve up both fair trade beans and an activism-oriented message. Or you could just want to settle down with the liberal talk radio station broadcasting from a station near you…This phenomenon-to-be will be published as a Vintage Books Trade Paperback Original this January, just in time for the inauguration of Barack Obama, and the ushering in of a new era of liberal culture.”

In case there was any doubt, a friend of mine at Vintage confirms that the new language reflects a deliberate shift in marketing strategy based on what they see as changes in consumer attitudes.
Obviously, this holds both promise and peril for Democrats and the Obama administration. Just as the myth of “center-right America” created space for the Bush agenda (and a sense in Congress that Members are politically constrained from supporting commonsense, internationalist foreign policy choices), the idea of a “new age of liberalism” can grease the wheels for some long-overdue progressive policy changes. The danger here is the expectation that broad, sweeping liberal change is on the horizon, which it probably isn’t (the disappointment in some circles with Obama’s cabinet choices is Exhibit A).
As an aside, The Nation’s Guide is pretty cool. I wish I’d picked it up a few days ago before I left Salt Lake City — I definitely would have popped into the One World Cafe, where patrons determine portion sizes and pay what they think is fair or volunteer in the kitchen or garden. Not a bad system for the visitor on a student budget.
— Scott Paul

Geneva to DC: Feel Free to Vote for TWN Again
Joe Biden’s CODEL to Iraq, Afghanistan and Pakistan: Working All the Angles. . .Like He Should!

7 comments on “A New Age of Liberalism?”