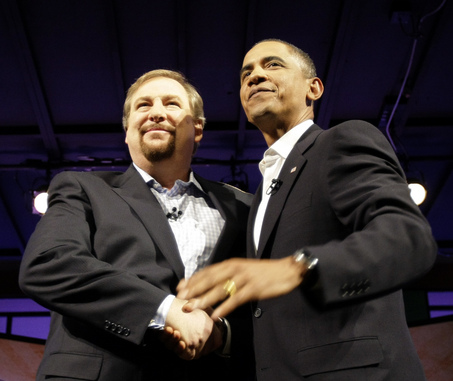 We suspect that Rick Warren probably still is buddies with President Obama and keeps the photos of his big day offering Barack Obama’s Inauguration day prayer prominently in his office, his home, his wallet, maybe on the dashboard of his car.
I know that there are a lot of folks out there who are as grateful today for Barack Obama running the nation as they were in January — but we aren’t hearing much from them of late. According to new Zogby numbers, Obama’s numbers are down in nearly every category of voter.
The “Republicans for Obama” crowd led by folks like former Senator Lincoln Chafee, former House International Relations Committee Chairman Jim Leach, philanthropist and lawyer Rita Hauser, and Ike granddaughter and national security policy expert Susan Eisenhower seem to me less enthused for Obama today as they watch with dismay the Obama team make some of the mistakes in Afghanistan that the Bush administration made in Iraq. Men, women, resources, drones, aid, all pumping into the AfPak region without a clear strategy with benchmarks for achievement.
The progressive left is having a tough time with Obama’s seemingly trigger-finger readiness to drop what progressives most want in a health care, or stimulus package, or other legislative efforts in order to satisfy a Republican right that keeps spitting on the President’s plans.
Thus far, Obama’s economic recovery efforts have kept more Goldman Sachs employees in their third Hamptons homes mortgages than average Americans in their homes and in their jobs.
And the gay community — despite the very best efforts of “out” Office of Personnel Management Director John Berry to assure otherwise — is doubting Barack Obama’s resolve to change the administration’s positions on “Don’t Ask, Don’t Tell” and to reverse the toxic impact of the Defense of Marriage Act (DOMA).
President Obama had a swell cocktail gathering at the White House for leaders of the gay community — and called out a whole slew of gay leaders’ names no doubt making them feel pretty good. But the bottom line is that moving issues important to the gay community is a low-ish priority for the President and his team. Because it’s clear that Obama just isn’t spending capital moving those issues.
To date, he has not asked the Joint Chiefs for the “policy review” he feels is necessary to move the Pentagon forward on “Don’t Ask, Don’t Tell.” Colin Powell has publicly stated that it is time for such a policy review. Even the once Salem Witch Trial style anti-gay paranoiac Senator Sam Nunn — who once fired two of his own staff for being gay and worrying about their threat to national security — has said times have changed and believes it is time for a “policy review.” But Obama has not asked for it.
Cocktail parties are not enough. As NPR’s Liz Halloran outlines, the gay community is vexed with the lack of action by the Obama administration. When John Berry powerfully and forcefully said at a recent Gay Pride Festival in Washington that “before the sun sets on the Obama administration, President Obama will reverse the Defense of Marriage Act and will end Don’t Ask, Don’t Tell”, it didn’t send a message of commitment.
Instead, these statements by the OPM Director, who is a fantastic guy and good friend, conveyed the political reality that the gay community is in last place when it comes to policy priorities.
When the sun sets is not soon enough.
Which communities are still in high sizzle mode for the Obama administration?
— Steve Clemons

79 comments on “Which Communities are Still in High Sizzle Support Mode for Barack Obama?”