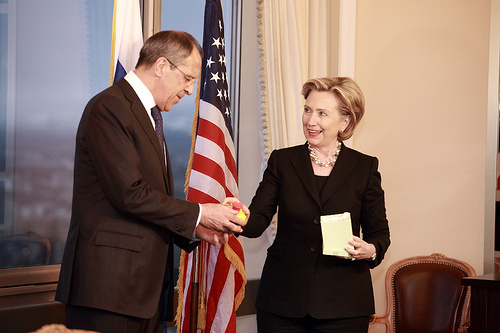 (Photo Credit: United States State Department)
Meri Lugo is a research intern at the New America Foundation/American Strategy Program.
When Secretary of State Hillary Clinton met with her Russian counterpart Sergei Lavrov last week, the prospect of negotiating a bilateral arms control agreement to replace the 1991 START treaty, was reportedly high on the list of discussion topics.
Admirably, Clinton announced that the two countries would have a START follow-on before the treaty’s expiration in December 2009. That might be pushing it–especially if the new agreement is done right. But first, some background.
START is the most detailed and extensive strategic arms control treaty agreement ever signed between the United States and Russia, limiting both countries’ strategic delivery vehicles, and by extension, the nuclear warheads attributed to such systems. Known for its complicated “counting rules,” (what “counts” as a warhead) it also limits the deployment and movement of delivery vehicles and requires extensive exchange of information.
Neither country wants to extend START in its current form. Some of the strict verification protocol, officials believe, is unnecessarily time consuming and costly. Constructed for Cold War adversaries, Lavrov recently called the treaty “obsolete.”
One reason why a START follow-on is crucial is its relationship to another arms control treaty, SORT. Also known as the Moscow Treaty, SORT limits “operationally deployed warheads,” to between 1,700 and 2,200, and allows Russia and the U.S. to interpret the definition of such warheads as they choose.
A mere two pages, SORT has no independent verification measures. Instead, it relies on the START protocol to give it teeth, meaning that in December 2009, when the START treaty expires, so do all of its accompanying verification and inspection protocols that buttress SORT.
But the chances of reaching a new arms control agreement in the next nine months are slim. Negotiating START took the better part of a decade, and President Obama has yet to even appoint a negotiator.
If negotiations remain incomplete by December 2009, a good interim solution would be to simply extend the verification and compliance measures of START. Though cumbersome, such measures are necessary to buttress SORT while the START follow-on (which would deal with the exact limits on warheads and delivery vehicles) is being finalized. President Obama expressed his support for this type of extension in his September 2008 Q & A with Arms Control Today.
The ideal follow-on to START would encompass the best of both existing treaties – cutting warheads beyond SORT numbers and limiting non-deployed warheads and delivery systems.
These comprehensive limits would fall under a robust and transparent verification system, a la START. But this will be tough. The very reason SORT can require deep cuts is its ambiguity. Calling for numbers below SORT with strict START counting rules would force the U.S. to make some tough decisions about its nuclear force structure.
How could such a strict agreement be implemented? One option for reduction (included in START) is “downloading,” or removing a number of warheads from ballistic missiles. To prevent the U.S. from simply “uploading” the warheads once again, START rules require a “replacement platform” for the downloaded missile if more than two warheads are removed.
This provision ensures that reductions are permanent. The modification, however, is expensive. The cost of replacing the front ends of hundreds of missiles to meet a new treaty’s limit would be astronomical. Another option is to eliminate some of the delivery vehicles themselves, perhaps phasing out one third of the “nuclear triad” (bombers, ICBMs and SLBMs).
Another hurdle to quick negotiations is the thorny issue of missile defense. Though there seems to be some genuine progress in diffusing the standoff over the proposed missile interceptors in Poland and radar in the Czech Republic, Lavrov has made plain that Russia views missile defense as inextricably linked to a START follow-on.
Negotiating an entirely new treaty in the next nine months is a tall order, and a lot is riding on this new agreement. Many arms control advocates, as well as international organizations and countries around the world, are hopeful that President Obama will set a new direction in arms control and nonproliferation policy.
Negotiating a comprehensive and ambitious arms control reduction treaty would indicate to the rest of the world that the U.S. and Russia are honoring their NPT responsibilities under Article VI to work toward eventual disarmament “in good faith.” It could also foment increased international goodwill and cooperation in non-proliferation policy, especially regarding Iran.
— Meri Lugo

16 comments on “Guest Post by Meri Lugo: When START Stops”