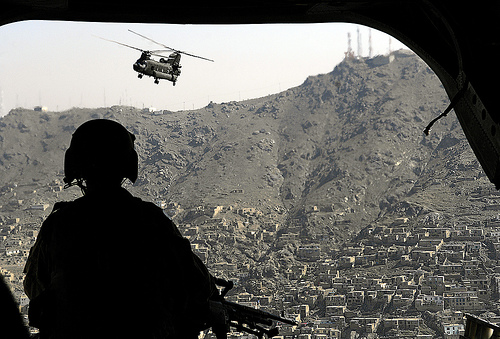 (Photo credit: Army.mil’s photostream)
Max Boot, Frederick Kagan, and Kimberly Kagan argue in today’s New York Times that we cannot afford to “lose” Afghanistan and suggest a number of tactical changes to our operations there.
Their argument contains three major flaws.
First, the authors fail to place the war in Afghanistan in the context of the United States’ overall national security strategy. Strategy is about priorities and trade offs. Pouring more troops, money, and political capital into Afghanistan means fewer resources to pursue our other national security objectives across the globe.
Dennis Blair, Obama’s director of national intelligence, recently told Congress that the global economic crisis has overtaken international terrorism as the greatest threat to our national security interests. But the authors fail to even try to argue why Afghanistan should be a higher priority than our other challenges.
Also, an honest assessment of whether a prolonged nation-building project in Afghanistan in in our interests must make some educated guess about the endeavor’s costs. The authors do not offer any estimates as to their proposal’s financial costs or duration.
Second, the authors’ mischaracterize their opponents’ arguments. They assert that “some claim we have no interest in making Afghanistan a functioning state.” But everyone would love for Afghanistan to become a functioning state; the question is whether we can make that happen through a prolonged military occupation.
Third, they claim that “the odds of success are much better than they were” in Iraq before the “surge.” The authors (whose piece is titled “How to Surge the Taliban”) seem to take for granted that our strategy in Iraq for the past two years has been effective. But the “surge” failed to achieve its strategic objective: political reconciliation in Baghdad.
Meanwhile, on the opposite page Council on Foreign Relations President Emeritus Leslie Gelb suggests that we withdraw our troops over a period of three years while providing military and economic assistance to fight terrorism.
I am not in a position to evaluate the details of Gelb’s plan, but I like that it acknowledges the regional nature of the problem, recognizes the limits of our power, and places the war in Afghanistan within a broad strategic framework.
Here is the key graph:

I don’t know whether the power extrication strategy sketched out here would be less or more risky than our present course. But trying to eliminate the Taliban and Qaeda threat in Afghanistan is unattainable, while finding a way to live with, contain and deter the Taliban is an achievable goal. After all, we don’t insist on eliminating terrorist threats from Somalia, Yemen and Pakistan. Furthermore, this strategy of containing and deterring is far better suited to American power than the current approach of counterinsurgency and nation-building.