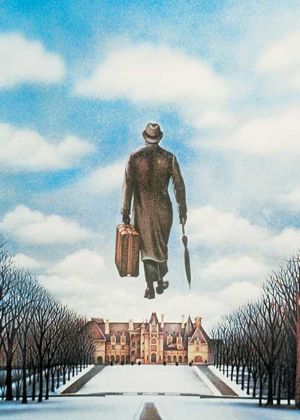 I like a lot of movies, but my bar for “like” is probably pretty low. I could probably make a long list of films I liked if I had a long list to choose from, but off the top of my head, some of my favorites include Henry and June, Chariots of Fire, Milk, Jaws, Crouching Tiger Hidden Dragon, Juno, Into the Wild, Gladiator, Clockwork Orange, Dr. Strangelove, Slumdog Millionaire, Being John Malkovich, Home at the End of the World, Amelie, The Unbearable Lightness of Being, My Dinner with Andre, The Dark Knight, War Child, All the King’s Men, Casablanca, Rising Sun (as I was in it — and spoke), Kinsey, and Tinker Tailor Soldier Spy. I think that like Andrew Sullivan though, one of my all time favorites was Team America, World Police.
I actually won a baby grand piano at Team America because I signed up for the Regal Cinema popcorn club — which also turned out to be a sweepstakes that I didn’t know about. (%&#@ yeah! Inside joke)
The films I like are probably pretty conventional with an odd twist here and there. But this list probably says something about me, though I’ll leave that to others to interpret.
For some time, I have been hanging out with a number of other movie hounds whose personal interests and foibles are probably recognizable in the films they most like.
Every couple of months, Margaret Carlson, Washington editor-at-large of The Week magazine and regular Bloomberg political columnist, hosts a dinner and movie event under the banner of The Week with Phillips Collection Chairman and former AOL Chief Counsel George Vradenburg.
These are great events. They bring a very nice mix of Washington insider types to a movie event where the topics of the evening are really focused on the great art on the walls, the personalities who were asked to pick the film of the night, and the quirkiness or profundity of the film itself. I know some folks who read this blog and recoil when I admit enjoying hanging out with insider types — but not only are these events revealing for some of the personalities there but I learn a great deal about what is happening in Obama Land, in Congress, the Pentagon and DC in general by going and mixing.
This last week, iconic CBS journalist and presidential debate host Bob Schieffer was honorary host for the evening and picked the movie Being There.
Scieffer said that he had seen the film every three years or so since it originally came out in 1979. Originally, he saw it as “satire” and now saw Being There as more “documentary”. Schieffer said that he saw the film as a “perfect example of when we all get carried away in Washington, when we see what we want to see and hear what we want to hear. . .”
I think that Schieffer’s movie pick was pretty brave — and I watched it in the Phillips Collection theater sitting next to Senator Lindsey Graham.
Lindsey Graham had his movie night a couple of years ago at the Motion Picture Association of America theater — and his selection was Seven Days in May which despite pretty Medieval depiction of women was a very provocative film at the time. In fact, in his opening testimonial about the film, Senator Graham said that today like in the 1950s, we needed to beware the “demogogery of military leaders and national security experts” who would take America in directions it should not go. I was on my feet (in my mind) giving Graham a standing ovation for that introduction.
Other of these movie night honorary hosts were Representative Jane Harman and Senator Susan Collins who picked Thelma and Louise; Chris Matthews — who was surprisingly deeply moved by Renoir’s “Boating Party” at the Phillips — picked Dave. Matthews also made a cameo appearance in the film. Former Senator John Sununu picked Dr. Strangelove, and Senator Christopher Dodd chose A Man for All Seasons — what some say was probably the “safest” film for a public official to decide on. Congressman Ed Markey‘s favorite film selected for one of these nights was The Candidate. . .but of course it was.
Others that watched Being There with Bob Schieffer, Lindsey Graham, Margaret Carlson and me included Alan Greenspan and his wife Andrea Mitchell, Susan Rice speechwriter Warren Bass, attorney Bob Bennett, Obama economic adviser Austan Goolsbee, journalists John Dickerson, Doyle McManus, Matt Cooper, John Harris, Walter Pincus, Dana Milbank, Mike Allen, Margaret Warner, and others. Smith Bagley of the progressive ARCA Foundation was there as was investor Mark Ein and Julia Chang Bloch.
For those who regularly post, it would be interesting to hear what your favorite film is in the comments section.
Recently at a dinner party at DC’s well-known Cafe Milano in honor of Bloomberg’s uber-connected PR diva Judith Czelusniak, I asked each of the guests what their favorite film was, what they thought the cheesiest film was they had ever seen, and the “most perfect” film whether they liked it or not. Many said Citizen Kane to that last query. Of course.
But I’ll share those responses another time. What I will say is that Being There was a good choice for DC types — because Schieffer is right that many here “see what they want to see and hear what they want to hear.”
Look forward to your lists.
— Steve Clemons

82 comments on “What One Learns from Politicos Who Watch Movies. . .”