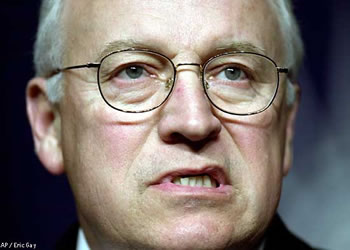 Barack Obama should keep his smile and not adopt the scowl that Vice President Richard Cheney often deployed to tenderize his victims, but he should pay careful attention to the way that Cheney animated hundreds of followers to move the Cheney agenda across the national security bureaucracy.
If one were to score “influence” within the G.W. Bush administration, Cheney would get top prize — higher than G.W. Bush himself.
No one knows how the incumbent President Bush makes decisions. He’s not consistent. He holds his cards close — and sometimes tilts one way, sometimes another. Swagger is the defining characteristic of Bush’s decisions — not necessarily logic, or at least not a logical line that I can discern.
Condoleezza Rice has a few followers who do understand her approach to problems — but she never worked to build a significant following.
Colin Powell, who advised caution and a review of every scenario in responding to a serious challenges, tended to matter when he was in the room — and not, when he wasn’t.
But as I have written previously and as Barton Gellman chronicles in his important new book Angler: The Cheney Vice Presidency, Cheney succeeded in not only getting people loyal and beholden to him appointed throughout the vast wings of the country’s national security and intelligence bureaucracies, he and his close team of David Addington, Scooter Libby and John Hannah conveyed a template for approaching the world and agitating for an expansion of Executive Branch authority in comparison to other branches of government.
Cheneyism is disdainful of international institutions like the UN, viewed Europe and other states essentially as supplicants of American power, pushed hard the “unitary executive” notion of presidential authority, reinstituted the secrecy regime to levels greater than Reagan’s CIA chief Bill Casey, promoted taking the gloves off” in American demonstrations of power abroad and in the interrogation room, endorsed torture and viewed the Geneva Accords as rules for the weak, despised regulation of business and industry — particularly the oil, forestry and steel industries.
There are many other dimensions to Cheneyism, but what is important is that his followers understood how Cheney thought and how he would respond to a problem or policy issues.
Dick Cheney has been the most powerful actor in the Bush administration because Cheney didn’t have to tell people hierarchically or by Rumsfeld-style “snow flake memos” what to do or how to think. They knew. And if they didn’t, Cheney might call and simply ask a loaded question of a bureaucrat — even a person very far down the pecking order of an agency or department — as to why he or she hadn’t thought of an alternative way [the Cheney way] of doing something.
Now to think about the new team moving into 1600 Pennsylvania.
According to some reports, Barack Obama seems to think that his intellectual, policy formulation and speechwriting skills are better than those around him — or so goes that narrative in a recent New Yorker article by Ryan Lizza:

Obama, who is not without an ego, regarded himself as just as gifted as his top strategists in the art and practice of politics. Patrick Gaspard, the campaign’s political director, said that when, in early 2007, he interviewed for a job with Obama and Plouffe, Obama said that he liked being surrounded by people who expressed strong opinions, but he also said, “I think that I’m a better speechwriter than my speechwriters. I know more about policies on any particular issue than my policy directors. And I’ll tell you right now that I’m gonna think I’m a better political director than my political director.”

Obama may very well be as skilled and confident as this passage suggests — but if he follows that line of logic too far — he’ll end up hamstrung with a huge bureaucracy that won’t necessarily understand the “Obama Way”.
Others might emerge in Obama’s White House with more power than he does to motivate and animate others because they may be more successful at communicating and telegraphing how to approach complex problems and challenges. Of those who are rumored to possibly be in the first Obama cabinet, potential holdover Defense Secretary Robert Gates comes to mind.
At a New America Foundation economic policy event that featured the economic advisers to John McCain, Hillary Clinton, John Edwards and Barack Obama, Obama’s adviser Austan Goolsbee made the seemingly sensible suggestion that when confronting complex trade and economic treaties, Obama would weigh each one on its merits. His basic point was that trade deals — even deals that seemingly promoted free trade — were hundreds, sometimes thousands, of pages long. They were not all the same and Obama would support some and not others.
On one level, this suggests flexibility. On another, this possible management approach suggests a micro-focus on policy that Obama can’t afford. Jimmy Carter was a compulsive micro-manager, and it severely handicapped his presidency. Goolsbee’s comment also implies that Obama may not be ready to telegraph to his Cabinet Secretaries, Deputy Secretaries, and others the DNA of his generic decisionmaking approach.
To be as successful as Dick Cheney was in influencing action in government, Obama is going to need to telegraph the secrets of “Obama-ism” to his people.
If not, we’ll have an ad hoc presidency, a reactive presidency, a micromanaged presidency, or a presidency hijacked by others who slyly follow Cheney’s approach.
So keep the smile, President-elect Obama, but begin to think about how you clearly convey to your team criteria for decision-making and a guide for responses to complex, unexpected challenges.
I have learned a lot from watching how the Project for a New American Century became so successful and consequential in a remarkably short period of time.
Barack Obama — who ran a very large, successful campaign operation that empowered many — should in governing nonetheless look to Vice President Cheney’s example to understand how a pro — even one who so damaged the interests of the nation — managed power and purpose while in office.
— Steve Clemons

57 comments on “What Barack Obama Should Learn From Dick Cheney”