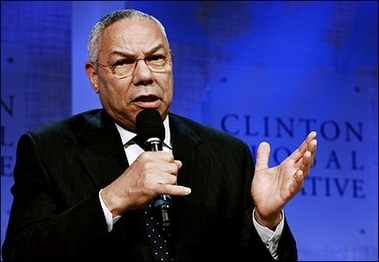 (This article appears today at Tina Brown’s “The Daily Beast.” Here is the actual link to my piece.)
This morning, about a nanosecond after Colin Powell gave his endorsement of Barack Obama for President, I called his long-time aide and former State Department Chief of Staff Lawrence Wilkerson. The brusque former Army colonel told me he had no idea which way Powell might tilt but that he was “utterly ecstatic” with Powell’s decision.
And he said that like Victor Lazslo said to Rick after all of the drama in “Casa Blanca”, which happens to be Colin Powell’s favorite film, he felt like saying “Welcome back to the fight, Colin.”
Since exactly three years ago today — October 19, 2005 — the day Wilkerson cleared his conscience and offered a full-throated condemnation of the Bush administration and “Cheney-Rumsfeld cabal,” the American public has been waiting to see if one of America’s greatest contemporary generals would follow in his aide’s footsteps and be able to distinguish between loyalty to the President he had served and loyalty to the people and Constitution of the United States. Wilkerson’s friendship with Powell suffered a massive blow as some thought Wilkerson was presuming to speak for Powell, which he wasn’t — but on many levels — Wilkerson and other dissident Republicans frustrated with the nation’s foreign policy course helped legitimate an exodus away from the GOP and towards Obama. Powell has now joined them.
Colin Powell — probably the only man who could have run against and beaten George W. Bush in 2000 — probably sees a lot of himself in Barack Obama. Clearly, they are both African-Americans and committed to breaking through every last racial barrier in the U.S. But Powell would have supported Obama had he been Caucasian, Latino, or Vietnamese-American. The value that Obama brings to politics is that he transcends convenient typecasting. Colin Powell kept breaking the mold as well as he rose to prominence and almost the White House — held back by his wife Alma who feared scenarios of assassination as well as his own sense that he didn’t have “the fire in the belly” for elective office.
Powell said of Barack today that “he has both style and substance. I think he is a transformational figure.” W’s first Secretary of State also didn’t like the defamatory slurs deployed by the McCain/Palin team trying to link Obama to William Ayers’ anarchist views. And Powell doesn’t think Alaskan caribou-gutting expert and folk legend Sarah Palin is qualified to be President of the United States.
Powell’s endorsement breaks some family china. His son, former Federal Communications Chairman Michael Powell has been an advisor on technology to McCain. And his best friend and potential defense secretary choice in a McCain White House, Richard Armitage, is still listed — despite Bill Kristol’s best efforts to export anyone connected to Powell out of Republican circles — as a key national security advisor to McCain. Lawrence Wilkerson has been with Barack Obama from just about day one of the Illinois senator’s race.
John McCain has frequently referred to Colin Powell as one of the greatest national servants he has known — and vice versa. The break with McCain today is about the General’s firm belief that America is at a pivot point in its history. John and Cindy McCain love Abba. That may sound modern in a Pierce Brosnan kind of way.
But Powell, 71 years old, was in London last week dancing some hip hop and singing some rap with Nigerian group Olu Maintain. Seriously though, Powell works hard for young, underprivileged youth and launched “America’s Promise” to help motivate and animate young people who get little support from others. That’s what really is driving Colin Powell’s endorsement.
Much of the political left doesn’t think it wants Powell’s endorsement. They are still angry at him for helping the Bush administration promulgate lies and half-truths at the UN General Assembly meeting designed to shore up support for America’s misguided invasion of Iraq. Americans loved Powell’s honor and dignity, fairness — but that day cost him a lot in the eyes of much of the country and world.
But Powell fought torture. He said that Guantanamo should be immediately shuttered and the detainees brought into America’s existing judicial system. In the Israel/Palestine standoff, he said we should engage Hamas — something neither McCain or Obama have had the resolve to admit needs to be done. Powell has been insisting that we should be dealing with the world as it is — not as we may imagine it to be.
How could he tell the next young group of students he meets through his own organization or when he speaks at mega-forum motivational seminar — or visits with kids in the classes Larry Wilkerson teaches in inner city DC each week — that Sarah Palin is what they should try and become. No way.
Powell wants the world to be better, to stand for better things — and that is not the world cynically sculpted by Karl Rove, Bill Kristol and McCain’s current team.
From the iconic general’s vantage point, genuine hope and change is what Obama stands for — and we should applaud Colin Powell for coming back into the fight.
— Steve Clemons