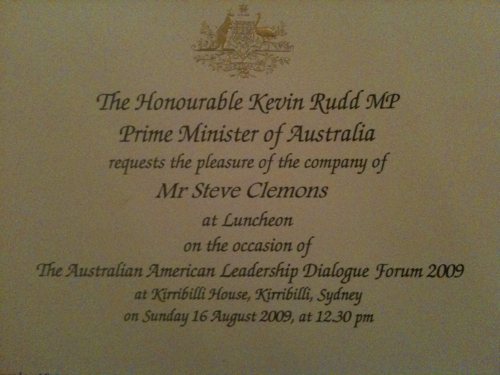 Last night at the gala 800 person dinner of the Australian American Leadership Dialogue, I was able to connect with the impressive Prime Minister Kevin Rudd and chatted with him about his and Barack Obama’s side chatter about Hawaii.
At an AALD reception in Washington a year or so ago, Rudd was then recounting to some of us that “The Dialogue” of which he was a founding member was the first activity that brought him to the United States. His wife, Therese Rein, hauled off and hit the newly minted Prime Minister in the arm and said, “Have you forgotten our honeymoon in Hawaii?!”
Given Barack Obama’s affinity and family roots in Hawaii, I thought this anecdote about Rudd would be fun for America’s new President and made sure that President Obama was informed about Rudd’s humorous stumble.
And last night, Rudd chuckled to me that not only did he hear about this incident of lapsed memory about Hawaii and its inclusion in the USA from Obama but also a lot of other folks as well.
Today, the American delegation of the Australian American Leadership Dialogue will be treated to a barbecue at the Prime Minister’s official residence, Kirribilli House, in Sydney.
Then tonight, speaking of Hawaii — I am off to Honolulu — and then tomorrow Tokyo.
On other fronts, Barack Obama is not underscoring that Hawaii is his most favorite vacation retreat in the world by choosing to take his family during the last week of August to a 28 acre estate on Martha’s Vineyard.
Martha’s Vineyard? That was where Bill Clinton put his presidential vacation stamp.
Note to President Obama: If someone asks you — whether through an interpreter or not — anything about President Bill Clinton and if you chatted with the former President about his favorite Vineyard nooks, please do not get huffy and say:

Guest Post by Amjad Atallah: Hamas vs. the Fundamentalists
How Can the United States Shape Iranian Interests and Behavior?

26 comments on “TWN in Australia: The Obama-Rudd Hawaii Chuckle”