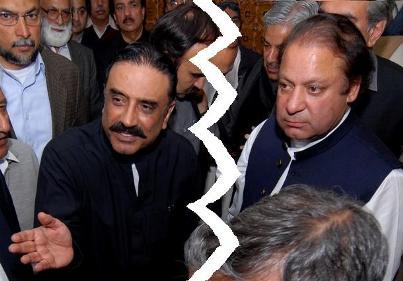 AP is reporting that Nawaz Sharif’s party has pulled out of cabinet positions from the coalition government with the PPP led by the late Benazir Bhutto’s husband Asif Zardari. While they’ve pledged to try to work out their differences, my sense is that despite the triumphalism and high expectations of democracy cheerleaders, the coalition continues to reside on a shaky foundation that can fall apart at a moment’s notice.
The difference is over judges dismissed last year by President Musharraf — reports states the two have disagreed not on “whether” to reinstate the judges but merely “how”. But the devil (not to mention the locus of power) is in the “how”. After all, Musharraf could contend that he too wants a stable and sustainable representative government for the future for Pakistan, he merely disagrees with Sharif and Zardari on the “how.”
The situation as it stands now strikes me as untenable — there is little advantage to remaining in a coalition government if one doesn’t have control of certain ministerial portfolios, especially with a feudal politics of Pakistan where the ministries are essential to shoring up political support amongst one’s constituencies. And one cannot reap the political rewards and capital of taking a distinct stand on the judges issue unless one is formally in the opposition. Sharif is likely making a power play to threaten dissolution of the coalition. To retain power, Zardari would have to bring in other parties into the coalition government, possibly the remnant of Musharraf’s party and coalition partners, which would proportionally forfeit his newfound democratic credentials and legitimacy.
It was expected that Sharif and Zaradari would have a hard time forming a coalition and holding it together given the legacy of bad blood between the two and their respective parties — Sharif’s party kicked electorally booted out Bhutto party twice in the 1990s, Zardari served a prison sentence for corruption under Sharif’s second term as Prime Minister, and Bhutto/Zardari initially tried to cut an American-brokered deal with Musharaff and squeeze Sharif out of the Pakistani political scene.
Most importantly, so long as Pakistani politics continues to be feudal in nature, governance will primarily remain a task of channeling the national patrimony to one’s base. And this fundamentally problemitizes a power-sharing arrangement between two dominant parties with very different constituencies.
–Sameer Lalwani

7 comments on “Trouble for the Happy Pakistani Couple”