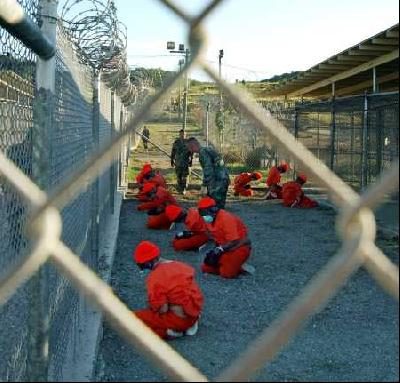 The Editorial Board of the Atlanta Journal-Constitution has published an familiar attack on the military and political authorities that kept Guantanamo buffered from normal American legal processes.
In a piece, titled “Guantanamo justice, evidence appalling“, the Jay Bookman on behalf of the editors writes:

Army Lt. Col. Darrel Vandeveld is a veteran of Iraq and Afghanistan and a prosecutor with well over a hundred criminal jury trials under his belt. In May 2007, he was assigned to prosecute Mohammed Jawad, a prisoner held at the U.S. prison at Guantanamo. It was a job that Vandeveld accepted and pursued eagerly as a patriotic American.
However, as he looked into the specifics of the case assigned to him, the colonel became appalled. In fact, what he found should appall all Americans of good conscience.
He learned that Jawad, held in Guanatamo since 2002, had been arrested in his native Afghanistan at the age of 15 or 16 and charged with throwing a hand grenade that injured two U.S. soldiers. But in the six years Jawad had been held, the military had made no attempt to examine or even compile evidence against him. Vandeveld discovered scraps of supposed evidence scattered in desk drawers, bookcases, tossed on empty desks or even thrown into a locker and forgotten. The story he tells makes it clear that the military had no real interest in Jawad’s guilt or innocence. In effect, the fact that Jawad was there was considered proof enough that Jawad belonged there.
The most damning piece of evidence against the Afghan teenager was a handwritten confession supposedly obtained by Afghan police before Jawad was turned over to the Americans. But Vandeveld’s faith in that document was shaken when he discovered that Jawad was functionally illiterate, meaning he could not have written or even read that statement. Furthermore, the confession was written in Farsi; Jawad speaks only Pashto.
The statement also quotes Jawad as confessing to have acted alone. Yet two adult men were also arrested by Afghan police for that attack; they too reportedly confessed.

This young man should be released, but ironically is being held yet another 120 days under Obama’s executive order to stall the military commissions.
I agree with the AJC editors in their kicker line:

But for now, Mohammed Jawad, supposedly one of the “worst of the worst,” remains in Guantanamo. In his statement, Vandeveld urges that Jawad be released not just for his own sake, but “for our own sense of justice and perhaps to restore a measure of our own basic humanity.”

9 comments on “The Shame of Guantanamo”