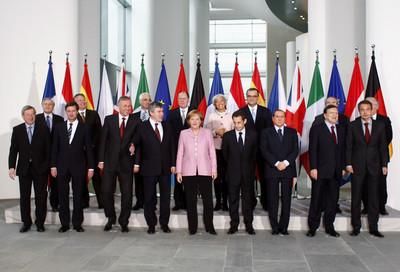 The London Summit takes place on April 2nd. While this will mark Barack Obama’s first global summit as president of the United States, the meeting hasn’t received much attention in the US – in sharp contrast to much of the rest of the world, which is highly focused on the event and collectively hopeful that it will result in some dramatic fix for the global economic crisis.
This meeting was scheduled back in November, 2008 as a follow up to the Washington meeting of the G-20. At that time, President Obama had just been elected, the Bush Administration was packing its boxes and the thinking was that quirks of the US electoral calendar prevented any real US-led initiatives from being considered. So, in spite of calls in the run up to that event for a “new Bretton Woods”, the failure to deliver on such high expectations was largely forgiven by those who put their hopes on the next meeting, by which point President Obama would certainly have the situation well in hand.
By scheduling another meeting for April, the thinking was that the new administration would be in place, and the working groups established in November could provide background assessments and analysis so that the world would be ready to embrace new thinking and bold solutions. Well, that time is upon us. Sadly, the “shameful” (Paul Volcker’s words – not mine) situation at Treasury, where almost none of Secretary Geithner’s senior political positions have been filled, means that it appears unlikely that last November’s high expectations for bold action will be met.
What I fear most is the drip, drip, drip of incremental fixes when something more structural may be needed. Some of the world’s most brilliant financial and policy minds have all written that we need big, new initiatives to take on the financial crisis. Business as usual just isn’t enough. Martin Wolf, Nouriel Roubini, Simon Johnson, George Soros… the list goes on. They have all looked beyond the trees and seen the global financial forest and have suggested the need for a structural re-think about how our banking and non-banking financial system works. Whether this makes it to the London Summit agenda remains to be seen.
I still hope that the summit will be a place where bold action by the US and other attendees is announced. However, I worry that the summit will, in the end, fail to announce the tangible steps that the global financial system needs and that world markets are looking for.
In particular, I am focused on the working groups established for this summit which have been tasked with exploring a re-think of how the global financial sector operates.
I don’t know what these groups will propose, but I am hopeful that they call for a deeper exploration of how “risk” is integrated into the global financial system. Risk is the cornerstone of Anglo-Saxon style capitalism, but how it is treated is one of the most misunderstood aspects of what is at the very core of needed reforms.
As governments play an increasingly large role in the global financial system, I believe that it is imperative that those proposing reforms consider the fundamental differences between those who approach risk as lawyers, politicians and policy-makers, to whom, in general, risk is something to be avoided and/or mitigated and those in the financial sector who believe that risk is something to be valued and managed. That distinction is of enormous consequence. Any proposals to reform the global financial system must take into account these fundamentally different approaches to risk.
This may ultimately result in a bifurcated financial system in which the more risk averse are drawn to a more traditional utility banking model (remember the phrase “boring bankers”?), and where the systemic nature of the banking sector makes them worthy of government intervention and taxpayer support. Those entities that seek to take on more sophisticated financial sector activities, wherein risk is valued and managed, would be excluded from the utility banking sector and would fall into a non-bank financial services sector. As proposed in the G-30 report led by Paul Volcker earlier this year, there are a number of different proposals to ensure that this sector is regulated on a globally coordinated basis to ensure that innovation is not destroyed but so that systemic threats are kept under control.
The agenda for the London Summit is long and expectations need to be managed. But financial markets have a notoriously short attention span – and the political process both in Washington and internationally doesn’t easily operate on a similar time frame. I hope that the US steps up and takes bold leadership at the April summit and that tangible steps to re-shape the global financial system are announced at that time – steps that provide comfort to those around the world, many of whom both resent the US for exporting an economic model that has caused so much dislocation and are also hopeful that we can lead the way out.
— Douglas Rediker

7 comments on “The London Summit: Bold Re-Think or Small Steps?”