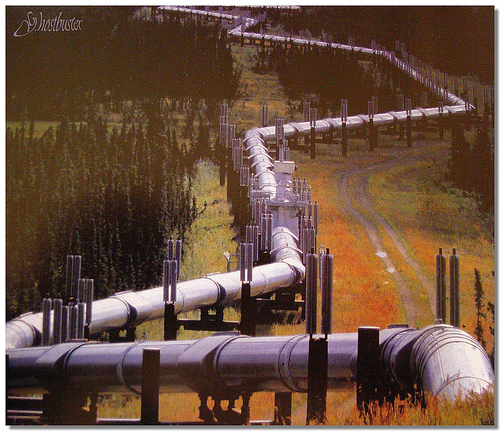 (Photo credit: G.hostbuster’s photostream)
Following the Russia-Ukraine gas disagreement last December, European leaders promised to diversify their natural gas supply away from Russia in order to prevent politically motivated shortages in the future.
German President Angela Merkel said that Russia’s actions would have consequences and European Commission Chief Jose Manuel Barroso called the crisis “unacceptable.”
Recent events, however, suggest that Russia will continue to divide and conquer European gas markets in a way similar to how toxic financial products continue to threaten Europe’s financial markets in the absence of a coordinated policy response.
The centerpiece of Europe’s diversification strategy is the proposed Nabucco pipeline. Nearly everyone (except Russia) supports the project in principle, but the details are proving difficult to sort out.
According to Flynt Leverett, Director of the New America Foundation/Geopolitics of Energy Initiative, “All of the structural obstacles that made Nabucco difficult before the Russia-Ukraine dispute remain.”
As I explained in my last post on this subject, the first problem with Nabucco is the question of how to fill the pipeline. While Azerbaijan claims that it can fill the pipeline itself, the country produced a total of 23bn cubic meters of gas last year, and Nabucco needs 31bn cubic meters to operate at full capacity. Turkmenistan remains under long-term contracts with Russia, and Iranian gas remains subject to American and European sanctions.
But the bigger structural issue at play is that the wealthy, western European countries are in a better position and therefore have different interests than their eastern European counterparts. This is analogous to the western Europeans’ refusal to bail out eastern European banks.
Countries like Italy, France and especially Germany possess the diplomatic and economic weight to play geopolitical hardball with the Russians. Therefore, these “old European” countries are more concerned with their reliance on transit countries like Ukraine and the Baltic states than they are with their dependence on Russian gas.
That partially explains why these countries oppose EU financing for Nabucco and are pursuing Nord Stream and South Stream, both of which would bring Russian gas to western Europe while bypassing the former Soviet states.
Similarly, Turkey’s objective with regard to Nabucco is to become an energy hub that brings gas westward to Europe. It makes little difference to Turkey where the gas comes from. In fact, Turkish officials recently suggested that Nabucco should be filled by pumping Russian gas into the Turkish section of the pipeline!
Clearly, this is not what the project’s architects had in mind.
It appears that the energy security game – like economic recovery – is mostly every country for itself. And unless that changes, Russia will continue to play European countries off of each other to maximize its strategic benefits.
— Ben Katcher