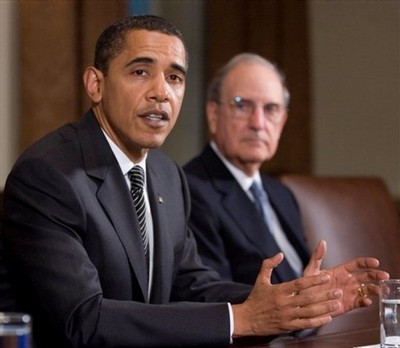 This is a guest post by Amjad Atallah, Co-Director of the New America Foundation/Middle East Task Force.
The Israeli elections are not really over. In one sense they are just beginning, as Israel’s multiple winners and multiple losers begin horse-trading on their conditions for joining a coalition government that will “govern” Israel over the next several months in the loosest sense of the word. One thing both Livni and Netanyahu will likely agree on – the need to continue colonizing the West Bank with settlements while urging the United States to confront Iran. What we won’t hear is any real talk about a game changing end of conflict that would bring security and acceptance to Israel and freedom and dignity to Palestinians.
That is a tragedy on a number of levels, but especially because the United States is compiling the best possible team we could have at this time to deal with the threat to our national interests posed by a continuation of the Israeli-Arab conflict. President Barack Obama is, by all accounts, as intellectually engaged with the complexities of the region and how they impact American interests as as any president since Eisenhower. He has compiled a team at the State Department and the National Security Council of hard headed realists committed to promoting US interests in the Middle East who recognize many of the linkages between ending Israel’s occupations, a successful US withdrawal from Iraq, a successful negotiation of our relationship with Iran, our wars in Afghanistan/Pakistan, and bringing al-Qaeda to justice.
But on the Israeli-Palestinian front, this A-Team is coming in at the worst possible time. Both the Israeli and Palestinian political systems are fractured. Some 65 seats in Israel’s 120 Knesset now are held by parties either explicitly opposed to a two-state solution or who interpret it in such a racist way that it would be unconscionable for the US to support. On the other side of the Green Line, Israel’s destruction of Gaza has made Hamas more popular than ever in the West Bank and broadened their appeal internationally. Eight years of Bush policy have strengthened the most recalcitrant elements on both sides of the border.
To secure our interests now, we not only need a diplomatic A-Team, but a drastic and creative new policy that works with the reality that we can’t expect the Israelis and Palestinians to end this conflict on their own.
For more, you can listen to this discussion between Aaron Miller, and Yossi Klein Halevi, and me on the Diane Rehm show.
–Amjad Atallah