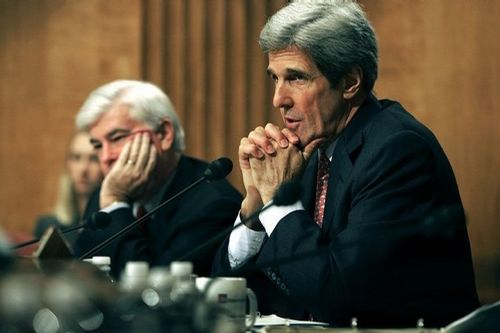 Today at 2:30 pm, there is a very interesting forum, or I should say a “roundtable”, that Committee Chairman John Kerry and his staff have organized on the national security and foreign policy implications of the financial crisis.
This follows the course I recently scribbled about in which both the Senate Foreign Relations Committee and the State Department are quite intent on fudging up the borders between classic geostrategic issues and economic ones — or as State Department Deputy Secretary James Steinberg said, they’ll be getting into “NEC issues” as much as “traditional NSC issues.”
Those speaking at the forum are former State Department Policy Planning Staff Director and National Intelligence Council Vice Chairman David Gordon. He’s well worth the time. He knows the future big game is with China.
Niall Ferguson who is mesmerizing will be fun, though he pines a bit too much for Americans to embrace empire the way Britain once did. Niall is dramatic but often wrong.
Douglas Rediker, a colleague of mine who directs the Global Strategic Finance Initiative at the New America Foundation, is a leading expert on the emergence of sovereign wealth funds and “state capitalism.” Worth listening to.
Sebastian Mallaby who is the 900 lb. (but thin in real life) economic brain at the Council on Foreign Relations and wrote a revealing, excellent book on World Bank President James Wolfensohn, and who also writes as an editorial writer for the Washington Post will have great insights on what is going on in the global economy — and my hunch is that most of his comments will address the coming trauma for developing nations, particularly Africa.
And lastly, there is Desmond Lachman from the American Enterprise Institute. I want to head Lachman’s fan club as he has been among the most accurate and straightforward of economic analysts to outline and predict the housing collapse and its broader ramifications.
I invited Lachman to speak at the New America Foundation in November 2007 on the future of the global economy — and everything he outlined has happened in proportion to his expectations. Too bad Dick Cheney didn’t listen to Lachman; he might have then seen this crisis coming.
Good panel and worth attending if you can. 2:30 pm EST. Dirksen Senate Office Building, room 419.
— Steve Clemons