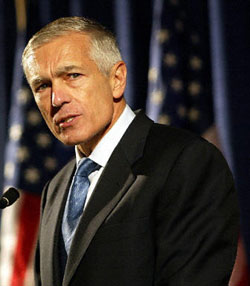 Today at 4 pm EST, join us for LIVE STREAMING here at The Washington Note.
I will be chairing a session with retired four-star General and former NATO Supreme Allied Commander, Europe Wesley Clark for a discussion on the national security and economic crises facing America.
General Clark will be speaking at the New America Foundation on the subject “America Needs Urgent Action: No Nonsense Thoughts on America’s Economic Crisis and National Security Dilemmas.” The meeting will run from 4:00 pm – 5:15 pm EST.
Wesley Clark was in 2004 a contender for the Democratic presidential nomination and is an active voice in debates about America’s national policy priorities.
In September 2005 and again in January 2006, Wesley Clark was the first major potential presidential candidate to advocate direct, immediate, unconditional talks and engagement with Iran. Others followed later.
Hope you can join us.
— Steve Clemons