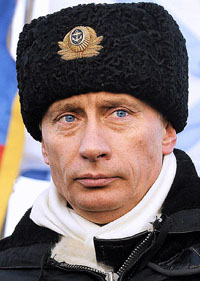 Some might recall that Hillary Clinton, who good money suggests will officialy secure the position atop the State Department soon, once remarked that Putin ‘doesn’t have a soul.’ This bridge will will require some maintenance work in early 2009.
Though the lack of an offical title has not constrained Putin’s control, as early as next year Putin could formally have the reigns of ‘mother Russia’ once again. It would only require that his successor, Dimitry Medvedev, step aside, thus moving elections up from 2012 to somepoint in 2009.
The fact that Putin — rather than Medvedev — offered the soothing address to the United Russia party this week, guaranteeing the stability of the economy and the government’s capacity to work through the global financial crisis, speaks volumes to the place he holds, and his legacy as premiere.
But to those looking at this as a ‘great rollback’ against democracy, I’m forced to pose the question: which is more damning, that he may seek reelection — which is already outlined in the constitution as permissible, as long as it’s not a third CONSECUTIVE term — or that he currently wields so much power as Prime Minister?
I contend that the power he still controls, more than the likelihood of him returning to the seat of power, is main cause for concern. The argument can be made that the likelihood of his return to power is the very force retaining his influence. If that’s the case, then certainly a constitution that provides for more than two terms, rather than the length of those terms, is the problem we ought to be discussing.
Democracy is a fickle being; and an indisputably organic phenomenon. That the constitution provides for a third, nonconsecutive term carries an important message about Russia, and its values in relation to governance. It echoes the importance of stability, as compared with the fear of overreach.
Furthermore, as America searches for its own leaders to believe in; as it looks out upon a more terrifying global recession than most of us have ever seen; it’s difficult to assail another nation for turning to the leader whom it trusts so deeply.
So I put it to you — is this a referendum on Russia, or the terrifying times we face? Is this step dangerous and unnerving, or a far less unsettling step than what is already outlined in the Russian constitution?
— Brian Till