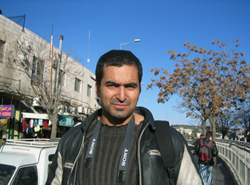 Note from Steve Clemons. My colleague and friend Nir Rosen who has been one of America’s most significant chroniclers of the Islamic dimensions of America’s war in the Middle East has just become a regular contributer to The Washington Note. Please welcome him. And as always, the views he expresses are exclusively his own and not those necessarily of The Washington Note or mine. — Steve Clemons
In June of 2003, two months after the United States conquered Iraq, I sat in on a briefing given by US Army intelligence officers in that most Sunni of Iraq’s cities, Tikrit, to a couple of officers visiting from Baghdad. One of the American intelligence officers based in Saddam’s famous hometown explained that they were worried about “Shiite fingers” from Iran “creeping” up to Tikrit to establish an Iranian style government.
At a time when the mostly Sunni Iraqi resistance had already established itself and its ability was improving, I was astounded by how stupid the notion of an Iranian threat in Tikrit was. I have remained shocked, like many journalists and academics familiar with the region and its languages, that the Americans have shown no improvement in their understanding of the Muslim world with which they are so deeply engaged militarily and as an imperial power.
We should expect little interest in understanding the outside world from an insular and isolated government whose leaders show open contempt for their own people. And we should expect diplomatic and military officials themselves required to maintain ideological purity to voice an equally unsophisticated world view.
But too often the so called experts are equally ignorant. Remarkably, their lack of background, expertise or language skills and their repeated errors have not diminished the credibility of people such as Fred Kagan of the far right American Enterprise Institute (a Russia expert!), or Kenneth Pollock of the Brookings Institute or their cohorts.
Ridiculously, Kagan and his wife, both of whom have only gone on official tours of Iraq with US Army babysitters, and neither of whom know Arabic, described the recent clashes in Basra as an operation initiated by the “legitimate Government of Iraq and its legally constituted security forces [against] illegal, foreign-backed, insurgent and criminal militias serving leaders who openly call for the defeat and humiliation of the United States and its allies in Iraq and throughout the region.”
Why anybody even hires or publishes Kagan on the Middle East is a mystery, but there is nothing legitimate in the government of Iraq, it provides none of the services we would associate with a government, not even the pretense of a monopoly on violence, it was established under an illegitimate foreign military occupation and it is entirely unrepresentative of the majority of Sunnis and Shiites who are opposed to the American occupation and despise the Iraqi government.
Moreover the dominant parties in the government and in those units of the security forces that battled their political rivals in Basra and elsewhere are the ones closest to Iran. The leadership of the Iraqi government regularly consults Iranian officials and is closer to Iran than any other element in Iraq today. Moreover, the Americans have always blamed their failures in Iraq on outsiders, Baathists, al Qaeda, Iranians, because they refuse to admit that the Iraqi people don’t want them. So Iran is a convenient scapegoat to explain the strength of the Sadrists, a strength actually resulting from the fact that they are a genuinely popular mass movement. Blaming Iran also lets the Americans maintain the illusion that the Mahdi Army’s ceasefire is still in effect.

Steve Coll on Capturing Bin Laden — the Literal and the Literary
Chuck Hagel: Ending the Nonsense in American Foreign Policy

67 comments on “Selling the War with Iran”