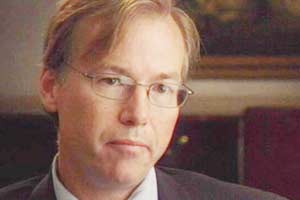 Update: The book event with Steve Coll will be streaming live here starting at 12:15pm today.
Two of America’s leading terrorism experts, Steve Coll and Peter Bergen, are suggesting that Osama bin Laden is at his most vulnerable point since 2001 due to new political alignments and his increasing unpopularity — both of which may soon unmask his whereabouts. But with a recent government report suggesting Ayman al-Zawahiri has emerged as the “strategic and operational chief,” will bin Laden’s inevitable capture really matter?
It’s telling that just as our base of knowledge and understanding have caught up to challenge posed by our enemies of 2001 or even 2003, the face and strategy of our enemies may have already evolved.
Coll and Bergen have been at the forefront of investigating the evolving anatomy of terrorist networks like al Qaeda but also providing a richer context for the development of characters like Bin Laden himself — the complexities and subtleties of his thinking that are intimately tied to the contradictions in Saudi Arabia’s modernization path.
Today in a public event from 12:15pm to 1:45pm, New America Foundation President Steve Coll will be speaking about his new book The Bin Ladens: An Arabian Family in the American Century. Peter Bergen will be offering remarks as well, and Steve Clemons will be moderating.
— Sameer Lalwani

Reid and Biden: Law of the Sea is There for the Taking
Selling the War with Iran