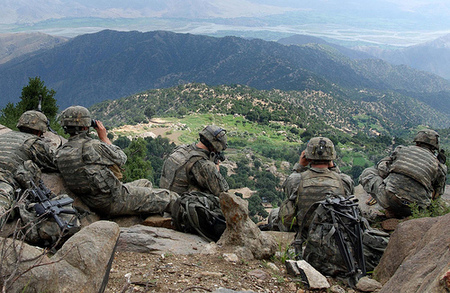 Rory Stewart, director of the Carr Center for Human Rights Policy at Harvard and author of The Places in Between, makes the case against escalating the war in Afghanistan in the pages of the London Review of Books.
In what I found to be a very entertaining and original piece, Stewart exposes the linguistic confusion, moral misunderstanding, and strategic contradictions surrounding the U.S./U.K approach to the “good war” in Afghanistan.
Here is the nut graph:

When we are not presented with a dystopian vision, we are encouraged to be implausibly optimistic. ‘There can be only one winner: democracy and a strong Afghan state,’ Gordon Brown predicted in his most recent speech on the subject. Obama and Brown rely on a hypnotising policy language which can – and perhaps will – be applied as easily to Somalia or Yemen as Afghanistan. It misleads us in several respects simultaneously: minimising differences between cultures, exaggerating our fears, aggrandising our ambitions, inflating a sense of moral obligations and power, and confusing our goals. All these attitudes are aspects of a single worldview and create an almost irresistible illusion.

Stewart’s analysis is one of the best reality checks that I’ve seen on this subject since the Obama administration decided to double down on Afghanistan earlier this year.
For the other side of the story, see Peter Bergen’s “Winning the Good War” in the current issue of The Washington Monthly.
— Ben Katcher