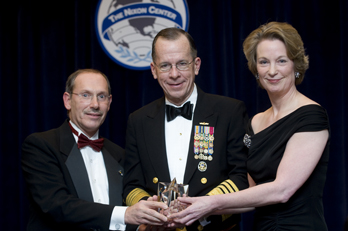 Barack Obama is about to become the 44th President of the United States and like most Presidents, he will begin (if he hasn’t already) to read as many profiles and biographies of great leaders as he can pile on his night table.
Or Lincoln’s.
Obama will try to understand how they processed complex challenges and look for templates of analysis, decision and action that might be relevant to his own life and new daunting responsibilities.
On Monday night, I attended the Nixon Center’s annual dinner honoring Joint Chiefs of Staff Chairman Mike Mullen who reflected on an assessment that Richard Nixon made of Eisenhower about the question of military power.
Admiral Mullen stated:

President Nixon, in his memoirs, recalled that same kind of surprise during a discussion on national security in 1951, when then General Eisenhower emphasized the political and economic facets of foreign policy rather than the military.
“This impressed me,” wrote Nixon, “because then, as now, it was unusual to hear a military man emphasize the importance of non-military strength.”

This is one of many passages in which American presidents have struggled with the efficacy of American military power and have tried to think through the best strategies to achieve America’s national security and global objectives.
Admiral Mullen wafted into his Nixon-Eisenhower comment through the portal of late 18th century British statesman Edmund Burke and added his own name to that of Defense Secretary Robert Gates and others who have asserted that America’s most significant security threats can’t be met by even the most richly endowed military machine. Other parts of the diplomatic and civil society establishment must be key parts of the American action plan.
Mullen stated in his interesting address:

The use of military means to achieve political ends is a thread of a rich discussion, one that reaches back through the ages. It was certainly so even in the winter of 1775, as Edmund Burke spoke on the floor of parliament at a time when England decided to send an army and a navy to put down the American rebellion.
Although Burke wasn’t exactly espousing our independence in his speech, he did question his government’s reliance upon military force in preventing it.
“Those who wield the thunder of the state,” Burke said, “may have more confidence in the efficacy of arms.
“But,” he continued, “My opinion is much more in favor of prudent management than of force, considering force not as an odious, but a feeble instrument in preserving a people as spirited as this.”
Had Burke’s contemporaries listened to him, perhaps things might be a bit different on this side of the ocean. But what about today?
I can only imagine his surprise if he were to hear our Secretary of Defense calling for more assets for our Foreign Service, USAID, the Departments of Agriculture, Justice, Commerce, and other non-uniformed implements of power and influence.
Surprised as well, perhaps, to hear someone actually wearing the uniform, standing before you tonight, telling you the same thing – much as I did back in 2005 as the head of our Navy.
President Nixon, in his memoirs, recalled that same kind of surprise during a discussion on national security in 1951, when then General Eisenhower emphasized the political and economic facets of foreign policy rather than the military.
“This impressed me,” wrote Nixon, “because then, as now, it was unusual to hear a military man emphasize the importance of non-military strength.”
So at the very least, I know I’m not the first. And I hope I’m not the last.

Barack Obama, at least as things stand now, has continued to characterize Afghanistan as the war America should morally wage and which is the good war in contrast to Iraq, “the bad war.”
Obama has also repeatedly stated that he wants to increase the size of the American military by about 90,000 active duty troops. Although America’s defense expenditures are greater than all other nations in the world combined — and yet Americans do not feel safe — Obama wants to pump up the manpower and resources available to the Pentagon without demanding a serious management review.
Resources can’t be the problem — mismanagement must be, and yet the President elect has hardly touched this issue.
Today, America’s power in the world is wielded both by the size of the Pentagon and by the size of its national debt. This is not a healthy posture for the country and not sustainable.
Obama would be wise to read up on Eisenhower, on Nixon, on Edmund Burke and others — and realize that for him to be a truly great leader, he must get out of today’s intertia-drive decisions that lean too much towards military answers to problems — and that are leading the US to greater calamity, global irrelevance, and impotence.
— Steve Clemons