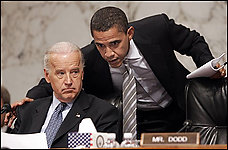 And Voting Begins. . .A Historic Day
Condolences to Barack Obama and Family

45 comments on “My Vote Tomorrow: Barack Obama and Joe Biden”