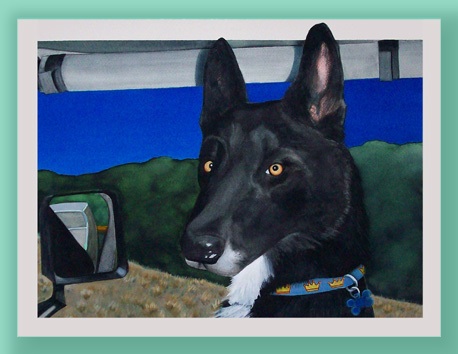 Loyal reader of and passionate commentator at The Washington Note, Pissed Off American (aka POA) sent this rendition of his loyal pup “Jake” for me to post.
I’ve been meaning to do it for some time — and have enjoyed it on my desk top on somewhat of an exclusive basis. Happy to share with others now.
I think I just found Jake as a pup online at this older blog site of the artist, “Nina.” But I need the link to her new website which I have misplaced and will ask Pissed Off American to send our way to post here in the morning.
I am back from China and Japan — the world’s two top surplus nations — and enjoyed an interesting dinner this evening with Ian Hargreaves who works as the head of strategic communications for David Miliband‘s operations at the British Foreign Ministry. Hargreaves approves of blogging best I can tell — though I haven’t seen any of his own ‘blogcraft’ yet. He previously served as editor of both The New Statesman and The Independent in London.
Hargreaves was reaching out to bloggers and media experts about the likely course of the Obama administration’s public diplomacy efforts. The meeting was off the record — but among those attending were Hillary Clinton’s new media wunderkind Alec Ross (who didn’t fail to impress), The Washingtonian‘s Garrett Graff, the departed-from-Brookings and brand new Vice President and Director of Studies at the Center for a New American Security Kristin Lord, the blogudite Henry Farrell (who got more excited than one probably should about a La Chaumiere souffle — but have to admit that I was privately excited for him); Carnegie Endowment Vice President for Communications Peter Reid; Conor Clarke — who hangs half a hat at The Atlantic Monthly and the other half at The Guardian; and others.
I’m off to Bonn, Germany this next evening (Tuesday) — (jet lag so complicates the hours) — arriving Wednesday morning to participate in the Deutsche Welle Global Media forum titled “Conflict Prevention in the Multimedia Age.”
If there are any TWN readers there, drop me a line.
On Wednesday, i will be appearing on Warren Olney’s excellent show To The Point to discuss President Obama’s visit to Saudi Arabia.
You can listen to KCRW live over the internet here. This particular show focused on President Obama’s Middle East diplomacy, Cairo speech, and visit with King Abdullah of Saudi Arabia will air starting at 12 noon in Los Angeles — but can be heard on the internet at 3 pm in DC and the East Coast — or at 9 pm in Germany where I will be. (A nationwide complete station list is available here — and in Washington, DC — the show normally runs at 10 pm EST on WAMU 88.5 and in New York at WSUF 89.9 at 8 pm)
And finally for those in Australia or who want to listen online, I’ll be back for my weekly chat about American politics — this time focusing on the GM bankruptcy and what it means — with Deborah Cameron of Sydney’s ABC Radio 702. If you are down under, the time of the show is Wednesday morning — but I typically chat with Deborah on Tuesday nights — so go to the site to figure out times.
More soon.
— Steve Clemons