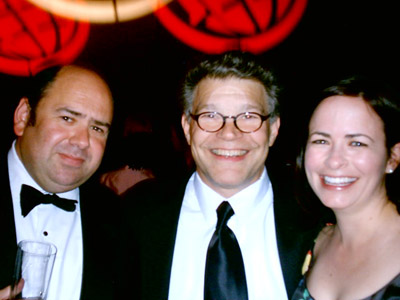 (That’s Matt Cooper on the left next to the great Al Franken)
I’m into “Facebook Journalism.” I think it’s really cool — though one of my friends who is a genuine, old school journalist (and out of a job) pretty much handed me my head when I called John Dickerson’s twitter reporting on Bill O’Reilly shoving an Obama staffer in New Hampshire “new journalism.” He was miffed.
Now Matt Cooper of Conde Nast’s Portfolio is reporting this on his Facebook twitter box:

Willing to bet this is the last Clinton election ever. No senate or presidential bid in ’12.

That’s interesting. I have been one to think that the Clinton franchise would hold together — even if she steps out of the race or was ultimately defeated by Obama. But an alternative view is that the Clinton political machine could completely collapse when her forward momentum to the White House is definitively stopped.
Matt’s bet that the Clintons, all of them, would head into a next ‘electionless’ life is not unbelievable.
Interesting stuff this Facebook journalism.
Here’s my page. My twitter box currently says that I am “impressed by what Dianne Feinstein knows about nukes” after an interesting dinner I attended with her last night.
— Steve Clemons

The End of the New Middle East
Robert Kagan Protests: Neocons are NOT Vampires and Werewolves!