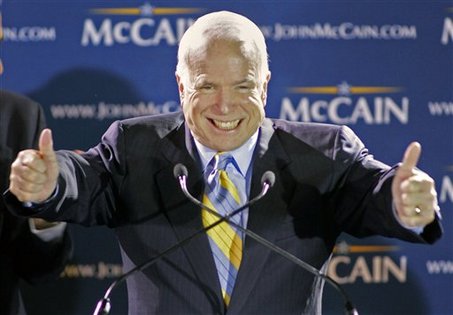 John McCain said tonight: “America doesn’t hide from history. America makes its history.”
This perhaps is the truest statement in McCain’s genteel, polite, and fairly unambitious speech tonight. America has in its past focused on major problems and figured out strategies to overcome them.
But while I liked John McCain’s manner tonight — for the most part — though there were lots of veiled references to Obama being a self-seduced believer in his own indispensability which I didn’t like — McCain gave us a roster of things he’d do which are clearly part of today’s incrementalism and an inertia of the past.
There were some odd moments, including talking about helping individuals who had lost their home in the sub-prime crisis and others who were working long hours and multiple jobs or who had become economic victims of corporate off-shoring. For the most part, McCain’s policy response to these sorts of problems have been tax cuts — not focused efforts that would help those who have been squished in today’s poorly regulated and turbo-charged global financial turbulence.
On health care, he spoke about helping more people but not all. How can he explain not trying to put a plan in place that would move those least well off into some sort of safety net? He didn’t touch that.
Compared to Barack Obama’s speech, there was a lot more policy detail — a lot of it actually. But taken as a whole, the package of proposals seemed anachronistic, tied to a past way of doing things — not jumping forward into a new world of institutional arrangements abroad and at home, a new social contract if you will here in America as well as a new global social contract with other nations.
But John McCain tonight sold his ability to work across the aisle — which Obama can do as well — but he also sold his POW experience and his toughness and competency in dealing with national security issues.
But here again, McCain didn’t give us Eisenhower, or Teddy Roosevelt, or Truman (I know. . .a Dem — but he did drop the bomb), or even Nixon. He gave us a big dose of Ronald Reagan’s national greatness flourish in a dignified, genteel and pleasant manner. In fact, now that I think about it, his speaking style reminded me a lot of Reagan — without the memorable lines. The ending of the speech was good though — and probably memorable.
But this was mostly about war and definiing America through conflicts and unfinished wars and occupations. Though he said he wanted to build a lasting, enduring peace — McCain gave the outlines of a neoconservative national security agenda fashioned by Fred and Robert Kagan, Bill Kristol, Randy Scheunemann, and others that I feel will further undermine’s America’s global standing and position. His long time aide and alter-ego Mark Salter wrote the speech, but while Salter is a strong national security advocate, he’s not yet a part of the most inner sanctum of neoconservative thinking and designs.
McCain tried to portray a deep calm and was reserved, in sober control to assuage those who think his irritability and temper will define him in moments of crisis. He reminded people that though he is 72, his 96 year old mother is still in top form. He made a case that he was a regular, self-indulgent military officer who placed himself and his fun and needs before his nation — before he was captured and tortured in Vietnam. Now, he says — he works for the people and the nation.
I won’t rip into John McCain for this commitment to service. I’ve spent some time with him and his closest aides — and I know that he and they are sincere.
I just don’t believe he understands how important it is to see that this is a major moment of historical discontinuity for the world and for the United States. To preserve America’s constructive global role and to offset more calamity at home and abroad — we need to talk about more than drilling off the coast, and keeping down taxes (while oddly continuing to beef up the US military and its obligations without regard to receipts to pay for this).
McCain’s program, his manifesto tonight, and his VP running mate choice of Sarah Palin — seem not about “shaking up” the substance of policy but rather about shaking up the optics of politics.
At the Democratic Convention, I was very taken by Senator John Kerry’s speech in Denver which outlined the large gap between positions taken by Senator John McCain vs. presidential candidate John McCain.
I think McCain is trying to be both about continuity and change — and that’s a tough thing to do.
I give him credit for his civility tonight. He has attack dogs now all around him — Sarah Palin, Lindsey Graham, Joe Lieberman, and others — and know McCain is going to try to be about hope and change in sort of an Obamaesque way we think.
Fascinating and less fiery ending than I expected after two weeks of conventions.
— Steve Clemons

Keeping Ameirca Strong
Can Turkey Serve as Europe’s Bridge to the Muslim World?

42 comments on “John McCain Channels Reagan: Both the Good and the Troubling”