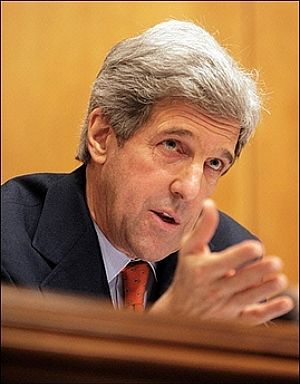 I am really proud of Senator John Kerry for getting out into the public sphere and explaining to Americans that the US needs to be cautious and nuanced at this fragile moment in Iran’s political course.
Barack Obama was wrong to comment at all in his offhanded comparison of Mahmoud Ahmadinejad and Mir-Hossein Mousavi. Many Iranians felt as if Obama — who has invested so heavily in trying to communicate with Iranian citizens in the past — dissed their aspirations for change.
That said, America ought not to be injecting itself into Iran’s political debate either in ways that make it an easy target for Ahmadinejad’s thugs or in ways that undermine the democratic and reform aspirations of the impressive, risk-taking protesters.
John Kerry, who chairs the US Senate Foreign Relations Committee, shared the following on CNN’s The Situation Room with Wolf Blitzer:

I think there are serious questions about the election. But I don’t – I think the Iranians are carrying that message to their own leadership.
There is no need for the United States of America to step into the middle of it and make this about America, when it is an Iranian moment, spurred on by Iranians, thoroughly supported by Iranians to the degree that the supreme ayatollah has now backed off his own support for the elections, called for an investigation.
The Guardian Council is going to meet, hear from all three candidates. This is a really extraordinary event that is playing out before our eyes, and it is playing out because Iranians are demanding that it play out. Iranians are being killed; Iranians have taken risks.

Here is an op-ed written by Senator Kerry and titled “With Iran, Think Before You Speak,” that appeared in the New York Times today.
— Steve Clemons

17 comments on “John Kerry is RIGHT: This is an “Iranian Moment””