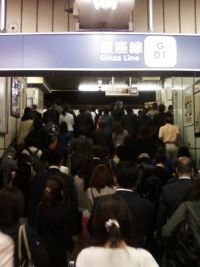 I took this picture this morning at Shibuya station in Tokyo, watching a real mob of people pack themselves in a 12-person thick long line entry into the Ginza line subway where train cars arrive every two minutes.
It’s quite hard to imagine after seeing this mad morning rush that on paper Japan’s economy has been contracting at a staggering rate — at least until recently.
There are new industrial output figures that were just released here that show a jump higher than any other in the last 56 years.
Likewise, in China — I saw and heard much anecdotal evidence that China’s economic growth may be picking up some speed again and that even exports are moving slightly up from their lows.
Some will take this as good news. However, I worry that America has achieved no fundamental restructuring of its economy — that the American domestic social contract between labor and firms and government and the financial sector has not been re-imagined during this crisis.
Chinese business and government authorities are obsessed with getting workers back on the job — whether they are satisfying the appetite of global buyers or fulfilling growing domestic demand which really is growing.
But in the US, there is a huge jobs creation deficit that the nation is not really addressing.
The world’s big surplus economies seem to be bouncing back to some degree — and have the expectation that the U.S. will continue to be the kind of consumer it has been in the last decade.
Regrettably, Barack Obama has not done much of late to change the “jobless recovery” course America is on.
— Steve Clemons

10 comments on “Japan May Be Running Fast Again”