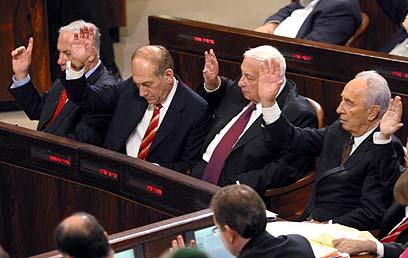 This is a guest post for The Washington Note by Tal Schneider, Washington DC Correspondent for the Israel daily newspaper Maariv.
There is an ever clearer, consistent political trend in Israel: prime ministers go through a decade long ritual of rising to the top, failing miserably and then climbing slowly up for a second chance given by the Israeli voters.
It might be too soon to tell, but Binyamin Netanyahu (Bibi) appears on the verge of being reelected this week.
Yitzhak Rabin, Ariel Sharon, Binyamin Netanyahu, Ehud Barak — all tried (and are still trying) to get a second flight as prime minister.
Rabin and Sharon made fabulous comebacks, intellectually and politically matured in their later terms only to depart the world stage at the height of popularity in tragic endings. Rabin was assassinated by a Jewish opponent to the peace process on Nov 1995 while Ariel Sharon suffered a major hemorrhagic stroke a few months following his bold evacuation of Gaza. Sharon has not waken from his debilitating coma since January 2006.
Will Bibi’s second round be more successful than the first?
Ehud Barak, whose first term as Prime Minister ended just 20 months after he swept the polls in 1999, has been trying to make a comeback since then. No luck for him yet.
Tzipi Livni, the youngest of possible nominees (50 years old) probably still has to go through proverbial political hell. If she will be elected (the latest polls showed she was closing in on Bibi) we can foresee from historical patterns a short, disastrous term, followed by predictable public bashing after which she will enter the comeback-club, and be entitled for a fresh start.
Perhaps following Israel’s rise-and-fall-and-rise rule, incumbent Prime Minister Ehud Olmert is off to the political desert (on corruption charges) just for a while. The Israeli public will no doubt forgive him, miss him, and want him back soon enough.
Why are the Israeli voters so indecisive? Why crown a leader and hurry to dump him (or her)?
How can one explain common enthusiasm in watching a leader fall only to embrace him back with the “he learned his lessons and changed so much” spin?
Ariel Sharon’s comeback was the most dramatic of all. In his first ascendancy, he was “just” a Defense Minister that had practically usurped the political helm and led the country to the first Lebanon War. After he was declared “unfit for command” by a judicial committee investigating the war, Sharon was banned from the political scene.
Nobody touched Sharon or associated with him. He spent almost two decades in solitary wandering in political wilderness. When he started to plan his comeback, people defensively declared that they would leave the country if he was elected.
Well, no one left the country when Sharon won a landslide victory in 2001. He became immensely popular according to public polls — and it seemed as if his war-related wrongdoing had become both insignificant and perhaps even part of his mystique.
As sociopathic as it may seem, Israel’s citizens may need to feel loathing for their leader before making them Kosher once again, and then pining for their return.
Bibi has been there, done that. He is ready to be back and the public may be ready for that as well.
During the campaign, Bibi made conspicuous efforts to dial down the extreme and the obstreperous, making sure the Israeli public got the message: he is not the same Bibi from 1996.
Netanyahu did not pop-up in front of TV cameras recklessly and remained largely silent though supportive of Israel’s offensive during the Gaza war, as if being ‘apolitical’ now equals Bibi.
But can Bibi “B” (meaning the second Bibi) deliver on his implied promise of change to Israel’s fickle crowd? Has he matured? Can he make sound decisions on Israel’s security and stir the country towards calm and long term stability in the region?
The answer will be evident soon.
— Tal Schneider