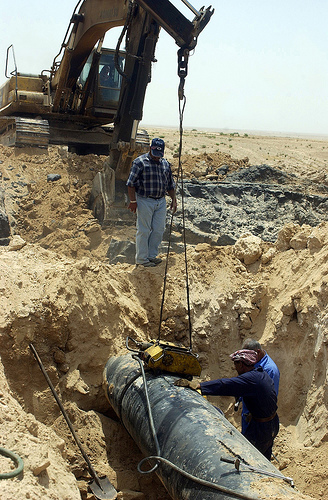 Iraq’s central government appears likely to begin allowing the Kurdish Regional Government (KRG) that controls northern Iraq to begin exporting oil through Iraq’s main pipeline, in the latest unexpected consequence of the global economic crisis.
A year ago, this kind of decision would have been unthinkable in the absence of a comprehensive national hydrocarbons law.
The reason for Baghdad’s policy shift is simple. The price of oil is under $60 – down from more than $150 last summer.
As Liz Sly details in today’s Los Angeles Times, the Iraqi central government – which depends on oil revenues for 90% of its income – is in serious financial trouble.
Absent a substantial increase in the price of oil, Baghdad is going to suffer from huge deficits and will have to persuade gun-shy foreigners to provide capital or beg the IMF for a rescue package.
Baghdad apparently feels so desperate for revenue that it is going to allow the KRG to export its oil to Turkey’s port in Ceyhan, the revenue from which will flow to the central government.
As this International Crisis Group report explains (see esp. pp. 15-19), there are two important reasons that Baghdad has historically objected to the KRG exporting its oil.
First, Baghdad wants to prevent the KRG from increasing its economic independence from Baghdad, which would help it to consolidate political control over its territory and increase its leverage vis a vis Baghdad.
Second, Baghdad is afraid that allowing the KRG to enter into binding legal agreements with foreign firms and to exercise effective control over its natural resources will strengthen any future claims of sovereignty or independence that government might make and broaden its international support.
If Baghdad does in fact allow the KRG to export oil through its pipelines, this is a significant indication of Baghdad’s economic weakness that deserves to be watched closely.
(Photo credit: jamesdale10’s photostream)
— Ben Katcher