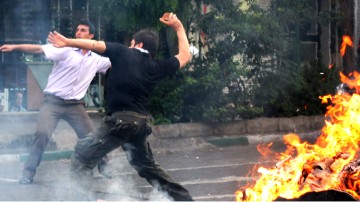 All students of revolutionary change should read Chalmers Johnson’s epic work, Peasant Nationalism and Communist Power.
The book is about so much more than China. It provides one of the best templates ever written to understand that most revolutionary conflict in the modern age is rooted in competing frames of nationalism. I think this applies to Iran today — in which Mousavi, Rafsanjani and their millions of supporters are competing to control the soul of their nation — not to move necessarily towards Western style democracy but rather because their view of nationalism and Iran’s pretensions as a great power differs from that of Khamenei and Ahmadinejad.
Another indispensable Chalmers Johnson masterpiece that all should read is An Instance of Treason: Ozaki Hotsumi and the Sorge Spy Ring.
Richard Sorge is acknowledged to be one of the most successful and consequential spies of all time — able to convey to the Russians the exact date of Germany’s “surprise” invasion.

But his key partner in crime in pre-WWII Japan was Asahi Shimbun journalist and China scholar Ozaki Hotsumi, who sat as a key advisor — probably was the key adviser — to Prince Konoe’s government on China policy.
If one doesn’t take a deep look a the triple layer chess approach to his objectives, Ozaki appears to be a bag of contradictions — a China-lover who had a heavy hand in pushing Japan to unleash an incredible viciousness in its Occupation of key parts of China and its military assaults in the parts of China and Southeast Asia not under its control.
But Ozaki, who was a China hand fascinated by the country, was a Communist and wanted to achieve “transformative change.” He wanted Japan to drastically radicalize the Chinese public and the whole of Asia so as the emotional and political ecosystem would be susceptible to Communist revolution.
In other words, he used Japan’s military might to radicalize the Chinese public — to lay the groundwork for revolution and change — which he hoped would actually spread into Japan.
Otsumi’s work largely succeeded — and almost even succeeded in Japan.
Today, violence deployed by the machinery of Iran’s state against its public is radicalizing them in ways that the Shah of Iran once did — and in ways in which the American-supported coup against President Mossadegh did in 1953.
Radicalizing a nation is dangerous stuff — and if the protesters win in Iran (which is still in great doubt) — there is no guarantee at all that Iran will move towards a warm and friendly posture.
Khamenei has gambled in incredible ways — pitting his and Ahmadinejad’s version of national interests against other key Iran political stakeholders — and while the security apparatus of the state appears to remain in Khamenei’s hands, the people — who are angry and feel violated — seem to have abandoned the Supreme Leader.
If Khamenei falls in this attempt to further consolidate his power, those that lead Iran may use a new form of nationalism, even a more strident form of nationalism, to legitimate who and what they represent in the eyes of the Iranian people.
But radicalization and nationalism are now key parts of Iran’s turmoil.
— Steve Clemons

12 comments on “Iran’s Fight is Over True Nationalism: Khamenei & Ahmadinejad Re-Radicalizing the Country”