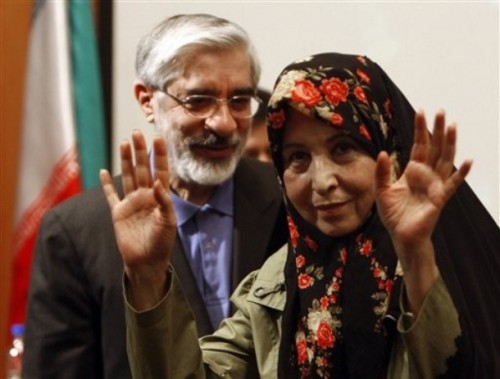 (To get a feel for what is going on in the streets of Tehran, watch this linked BBC video clip.)
Last night in London after appearing on Keith Olbermann’s show, I got an email from a well-connected Iranian who knows many of the power figures in the Tehran political order asking to meet me. I told him that the only place possible was Paddington on the way to Heathrow — and there we met.
He conveyed to me things that were mostly obvious — Iran is now a tinderbox. The right is tenaciously consolidating its control over the state and refuses to yield. There is a split among the mullahs and significant dismay with Supreme Leader Ali Khamenei. A gaping hole has been ripped open in Iranian society, exposing the contradictions of the regime and everyone now sees that the democracy that they believed that they had in Iranian form is a “charade.”
But the scariest point he made to me that I had not heard anywhere else is that this “coup by the right wing” has created pressures that cannot be solved or patted down by the normal institutional arrangements Iran has constructed. The Guardian Council and other power nodes of government can’t deal with the current crisis and can’t deal with the fact that a civil war has now broken out among Iran’s revolutionaries.
My contact predicted serious violence at the highest levels. He said that Ahmadinejad is now genuinely scared of Iranian society and of Mousavi and Rafsanjani. The level of tension between them has gone beyond civil limits — and my contact said that Ahmadinejad will try to have them imprisoned and killed.
Likewise, he said, Rafsanjani, Khatami, and Mousavi know this — and thus are using all of the instruments at their control within Iran’s government apparatus to fight back — but given Khamenei’s embrace of Ahmadinejad’s actions in the election and victory, there is no recourse but to try and remove Khamenei. Some suggest that Rafsanjani will count votes to see if there is a way to formally dislodge Khamenei — but this source I met said that all of these political giants have resources at their disposal to “do away with” those that get in the way.
He predicted that the so-called reformist camp — who are not exactly humanists in the Western liberal sense — may try and animate efforts to decapitate the regime and “do away with” Ahmadinejad and even the Supreme Leader himself.
I am not convinced that this source “knows” these things will definitely happen but am convinced of his credentials and impressed with the seriousness of the discussion we had and his own concern that there may be political killing sprees ahead.
This is not a vision he advocates — but one he fears.
— Steve Clemons

91 comments on “Iran: There Will Be Blood”