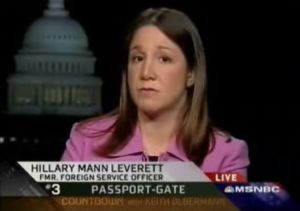 This is a guest post for The Washington Note written by Hillary Mann Leverett, a former State Department and National Security Council official who participated in numerous rounds of secret negotiations with Iran.
Monday’s news that the Iraqi government is moving quickly to prepare the expulsion or deportation of the MEK – the Saddam-era Iraqi-based Iranian terrorist group — from Iraq is an important story that needs to be understood in the context of the post-9/11 U.S.-Iranian dialogue over Afghanistan and al Qaida, a dialogue in which I directly participated.
During US talks with Iran in 2002-2003 when it became clear the US was going to invade Iraq, the Iranians made clear that they would turn over suspected al Qaida figures in Iran to the U.S. in exchange for the U.S. allowing MEK leaders based in Iraq to be turned over to Tehran.
In 2003, the Bush Administration inexplicably rejected this offer and then had the gall, as the occupying military power in Iraq, to give the MEK “protected status” under the Geneva convention, which essentially prevented the Iraqi government from turning the MEK operatives over to Iran. The Bush Administration’s reasoning was that they wanted to have the MEK on hand to use as necessary to be a thorn in the side of the Iranian government – and, perhaps even a paramilitary force supporting a U.S. strategy to achieve regime change in the Islamic Republic.
Since the US and Iraqi governments have concluded the SOFA, the US government can no longer protect the MEK. And, it is clear that the Maliki government is moving to assert its own sovereignty by laying the ground work for the MEK’s deportation to Iran. Now, Iran may get hold of the MEK forces without having to give up a single thing.
On the talk shows this weekend, Secretary of State Condoleezza Rice claimed that the conclusion of the SOFA shows that the US is winning over Iran in the battle for influence in Iraq.
The story I’ve just recounted strongly suggests that, as usual, Rice is out of touch with on the ground realities.
— Hillary Mann Leverett

Wow? Al Franken is Going to Win
RICHARD VAGUE: How to Fix the Economy

11 comments on “Hillary Mann Leverett: America Loses Another Bit of Leverage with Iran”