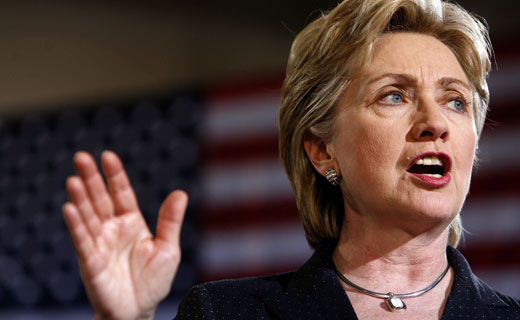 Four days ago I published and then quickly “unpublished” this item on Hillary Clinton being in line for Secretary of State:

I just received some surprising news — like, really surprising.
The deal is not done — but at the moment — Hillary Rodham Clinton is in the lead to be Secretary of State.
I thought she wouldn’t take it if offered. I thought that she would wait until the 2010 midterms and see how Barack Obama does before choosing her next course — just in case she wanted a rematch.
But as odd and difficult to believe as this is, I have excellent inside information that the job is hers if she wants it.
— Steve Clemons

Let me state the reasons I posted and then unposted it. I had intended an immediate follow-up to make more nuanced my post, but my schedule proved too overwhelming at the time to get the piece up.
I received a tip from another well-connected friend who reported to me that last Saturday evening, one of Barack Obama’s closest advisers told trusted friends that Hillary could very well be the next Secretary of State. I received the call Sunday morning.
The fact that this was being kibbitzed about could have been part of a process of trying to seem respectful of Hillary Clinton by leading members of the Obama team. It could have been a ‘head fake.’ Alternatively, it could have been real.
I thought that it was important enough of a piece of credible gossip that it should be out on the internet and be introduced to the discussion on who might — and who should — succeed Condoleezza Rice as Secretary of State.
A few minutes later, I got on the phone to people who were part of the inside wiring of Hillary Land, and I was told bluntly that I was either being fed something that wasn’t true and was a distraction or that “Hillary’s senior team had not been ‘read in’.”
It seems that the latter may have been the case because of the news reports now that she is being seriously considered.
I had been told by other close Hillary Land keyholders that Hillary had never really acquiesced to being a Senator from New York forever. She wants to do something significant and distinctive with her life, I was told.
It would have been logical for her to keep her powder dry on what her next steps would be to see if Obama suffered serious political defeat in the 2010 midterm elections — but others tell me now that she decided that there would be no way of unseating Barack Obama from the Democratic Party’s endorsement in 2012, no matter the results in 2010.
This then opened the possibility of other options — including Secretary of State.
So, to those who wanted to know what happened to the post I had up — well, the real answer was very mixed signals. . .and I thought before I began to be misinterpreted as saying she “would” be Secretary of State as opposed to she “could” be Secretary of State, I wanted to modify the posting and didn’t get to it.
I also began to wrestle with the framing that this is EXACTLY what George W. Bush did to his most serious rival in 2000, Colin Powell. He gave Powell Secretary of State and then began to box him up. Barack Obama may be on the same track with Hillary Clinton who is and was his chief rival in the Democratic Party today.
Many of you asked what was up — and that’s the whole story.
Very interesting.
— Steve Clemons

‘Renegade’ and ‘Renaissance’. . .Better Than ‘Maverick’ and ‘Medieval’
Obama’s Brain

84 comments on “Hillary Clinton as Secretary of State?”