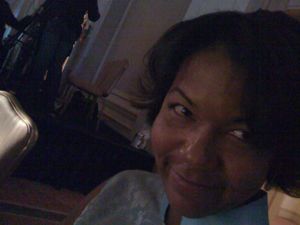 This post is a “professional courtesy salute” to Helene Cooper who we now see so frequently in White House press conferences with Barack Obama. She often gets the first question in at some of the high sizzle press moments with the President.
I couldn’t be there, but last night Cooper was feted at a big dinner at the National Press Club sponsored by the Merage Foundation for the American Dream and the Woodrow Wilson International Center for Scholars for her work in journalism and for her recent, highly acclaimed memoir, The House at Sugar Beach: In Search of a Lost African Childhood.
Helene Cooper’s life has already been an incredible journey from the position of having been a somewhat spoiled and too privileged young girl in Liberia’s elite circles to seeing many of her relatives murdered and moved from wealth to poverty during and after the revolution there. She worked up the ladder in the United States — mastering American style English and writing, and moving from local news reporting to the Wall Street Journal and now covering Barack Obama for the New York Times.
I give Cooper a rough time now and then for being too open-minded with the pugnacious nationalist crowd and with various neoconservatives — but that’s why she’s so good. She has everyone bitching at her for being fair.
All that aside, I just wanted to commend her for the excellent example she sets for others.
The full roster of honorees at the dinner included:

But for those outside the Beltway who think that these dinners are just loads of fun, one person queried by one of the organizers about attending a different fete next week humorously responded:

Only if they promise some more funky video footage on top of 2hrs of speeches …… Hell, for that DVD I’d re-group every darn week ……

On other fronts, for those following Barack Obama’s Middle East trip, here is a useful essay by the Financial Times‘ Edward Luce commenting on Barack Obama’s “progressive realism.”
I’ll have more later, I hope, on Obama’s remarks in Cairo and his approach to the Middle East — but will be after I depart Frankfurt and land in Chicago — and before I board next plane to Dallas/Fort Worth.
Then to DC on Saturday.
— Steve Clemons

Can Obama Move His Red Line Forward to Strike a Deal with Iran?
US Rallies Around Consensus that Cuba Should Be Welcomed Back to OAS