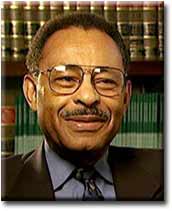 Roland Burris has few detractors and may be a very interesting, somewhat unassailable choice to fill Barack Obama’s Senate seat. Burris — a former Attorney General and Comptroller of Illinois — seems to be a decent guy. (photo courtesy of The HistoryMakers)
The only problem is that scandal-plagued Illinois Governor Rod Blagojevich wound mortally wound even the very, very best prospective candidate’s legitimacy by selecting him or her.
Senate Majority Leader Harry Reid and the Senate Democratic Leadership had this to say about Blagojevich’s moves to fill Obama’s seat:

Reid and his team are right. Blagojevich, until and unless he is cleared, has zero legitimacy in the eyes of most of his citizens, and should not sully Roland Burris’s name and record with this appointment.
But Reid and the Senate leadership should make a positive, constructive statement about Roland Burris and his service — and indicate publicly that he is the kind of person who should be on any person’s list as candidates to fill the vacant Illinois Senate seat.
And if nominated formally, I hope Roland Burris does not accept from Blagojevich.
— Steve Clemons