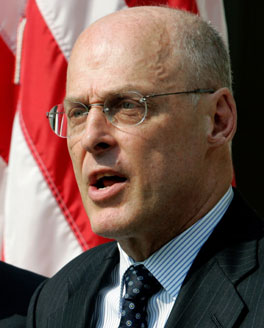 I was just invited to a fundraising dinner for the US-China Education Trust and FY Chang Foundation honoring Treasury Secretary Henry “Hank” Paulson, Jr. The dinner is Friday November 14th.
All I can say is best of luck. In case Paulson drops out, perhaps Paul Krugman will be a massively bigger draw.
— Steve Clemons