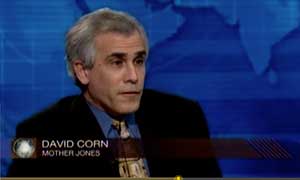 (Did not run into David Corn today; photo courtesy of the News Hour with Jim Lehrer)
The Weekly Standard‘s Michael Goldfarb dubbed my post about David Corn, policy, and my constantly running into him as perhaps one of the most self-absorbed blog posts he’s ever read. I’ve probably written some others over the past four and a half years that beat that one — but his point is probably on target, regrettably.
I was actually trying to be humorous — and as I’ve reported on this blog before, I’m lousy at jokes and not that good at humor. I am envious of my friend and former Newt Gingrich aide Robert George who blogs at Ragged Thots as he has real stand-up comedy skills. I just don’t.
But the real reason I wrote about the David Corn stuff was that I wanted to share some of the references about Ben Affleck and Gaza, as reported in the Washington Post — and wanted to use that Mary Ann Akers clip as a way to lead into a separate subject on John Kerry’s discussion with Ben Affleck about the US economy. Circular reasoning, I know — but that was what was going on in my head.
So, apologies to those who were ticked by the self-indulgence of that blog post… I thought at the time that there were more reasons for writing in the style that I did. . .but sometimes, one just belly-flops and does something over the top and silly.
The bigger point I was trying to make is that substantive policy discussions can occur at the most vapid-looking parties.
And by the way, I didn’t see David Corn today. 😉
— Steve Clemons

40 comments on “Guilty of Self-Indulgence”