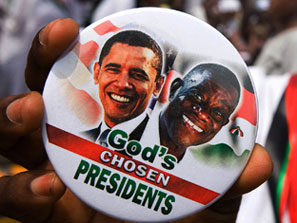 Jonathan Wallace is the Assistant to the President at the New America Foundation.
After the G-8 meetings in Italy, President Barack Obama will travel to Ghana on his first visit to Africa (discounting his visit to Egypt). He will visit Cape Coast Castle, an infamous slave trading port, and give a speech to the Ghanaian parliament.
The speech to parliament is an appropriate gesture as Ghana is West Africa’s most stable democracy, having recently undergone a peaceful transition of power between two different political parties after a very close and contentious election. The election last year of John Atta Mills was particularly significant and laudable in comparison to the election violence that marred contests in Kenya and Zimbabwe and the corruption of Nigeria’s 2007 vote.
Ghana’s discovery of oil in 2007 in the large Jubilee field in the Gulf of Guinea, has raised concerns that this well-governed though still fairly undeveloped country may follow the same tragic path as Angola, Chad, and Nigeria. Oil wealth in these states has led to corruption, increased poverty, violence, the desertion of indigenous industry outside of energy, and declining living standard for all but a few well-connected elites.
Ghana is well aware of this trap and has been looking to set up institutions to avoid the so-called “resource curse.” Impressively, these efforts span presidential administrations and political parties in Ghana, but there is much more to be done.
This Oxfam report does an excellent job laying out the challenges ahead for Ghana policy makers and some solutions to try to avoid falling into a tired and tragic narrative. Some of the better suggestions include building and strengthening the regulatory regime before the oil starts to flow and delaying spending to avoid the dreaded “Dutch disease.”
Obama was right to choose Ghana for his first true African visit. Instead of visiting his father’s native Kenya, or oil behemoth Nigeria, President Obama will recognize that good governance can flourish in Africa and be a model for other nations. Hopefully, he will remind the Ghanaian policy makers that transparency is the best method to ensure broadly shared prosperity, and that it becomes especially important with the added blessing and burden of oil wealth.
— Jonathan Wallace