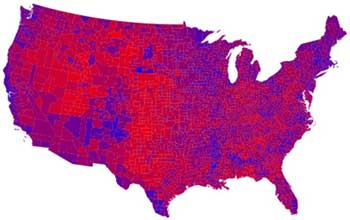 This is a guest post by a long time reader of The Washington Note.
As a charter reader of TWN, I appreciate Steve’s allowing me to guest blog on this occasion, from way outside the Beltway in the US State of Georgia, about the importance of the Senate races in the coming election and particularly the one in Georgia.
Most of you around the country recall the ugly negative campaign against Max Cleland in 2002 that elected Saxby Chambliss. Cleland decided never to seek elective office again.

Jim Martin, the Democratic candidate, is an excellent choice: A native Georgian, educated in Atlanta public schools with undergrad and law degrees from UGA, a Vietnam veteran, father and grandfather, who served 18 years in the Georgia legislature and then served as Commissioner of the Georgia Department of Human Resources under both Democratic and Republican governors. This is a very red state where Republicans control both houses of the state legislature, the governor’s office, both U.S. Senate seats, and a majority of the state’s congressional seats.
Chambliss is very well funded and did not have to spend on a primary and a primary runoff as Martin did. So if you live in Georgia, consider getting involved at the local level as I plan to do. And if you don’t live here and care about how Max Cleland was treated and want to help or learn more, go to www.martinforsenate.com.
When I moved to Georgia from California three years ago, I promised myself and friends in big blue CA that I would work hard to make GA less red and more purple. It is important that the U.S. Senate have as large a Democratic majority as possible next year regardless of which candidate is elected President, perhaps more so if McCain is elected.
SCOTUS is important, but so are all the other federal judges in district and appeals courts who are appointed for life. Far too many of the district and appeals courts judges appointed and confirmed during the Bush administration were very poor choices. They all have lifetime appointments.
I care about civil rights, workers’ rights, equal pay for women, habeas corpus, treatment of detainees, our obligations under Geneva conventions and other international treaties, checks and balances between the executive and legislative branches of government about commitment of military force and other issues, the right to privacy, and a woman’s right to choose. So for me, this election is about the judges the next President will appoint and the composition of the Senate that will confirm them.
According to the latest information from the Democratic Senatorial Campaign Committee, two of the 12 Democratic Senate seats currently up for re-election are in play: Mary Landrieu in Louisiana and Frank Lautenberg in New Jersey.
Of the 17 Republican Senators up for re-election, 8 seats are in play: Saxby Chambliss in Georgia, Norm Coleman in Minnesota, Susan Collins in Maine, Elizabeth Dole in North Carolina, Mitch McConnell in Kentucky, Ted Stevens in Alaska, and John Sununu in New Hampshire. Of the 6 open seats, 4 are in play in Colorado, Mississippi, New Mexico, and Virginia.
“In play” is used very loosely here indeed. The Democrats are not going to win all these seats in the Senate.
Everyone who cares about these issues and does not plan to get involved in the Presidential race should consider helping (including those whose from other states whose Senators are not up for election or are in safe seats) or volunteering in Senate campaigns. I suggest this particularly to those who are for Obama but don’t like some of his recent shifts to the center; were for Clinton and plan to vote for Nader, McKinney, McCain or not vote for President; independents and Republicans for Obama.
There are ways you can participate in this election even if you are weary or wary of both major Presidential candidates.
I remind TWN readers that Steve Clemons is registered as an independent and has not favored either candidate in the Presidential election.
I am a lifelong Democrat who does occasionally vote for the better Republican. That surely is not McCain. Though I have been for Obama, I have firmly intended to vote for any Democrat nominated because I believe the most important consideration is nominations to the Supreme Court and other positions in the federal judiciary.
We can’t know what any candidate will do or how good he will be or not be until actually in office for a year or two–or if he will keep his campaign promises, pleasantly or unpleasantly surprise us, be greater or lesser than we anticipate, or confirm or contradict what we think we know of his character.
The choice is very clear between the two candidates for me because the longest legacy the next President will leave is his appointments to the federal judiciary.
— Linda Z.

A Tragedy Five Years Ago Today: Remembering Sergio and the UN in Iraq
Biden: Does He Know Something We Don’t Know?