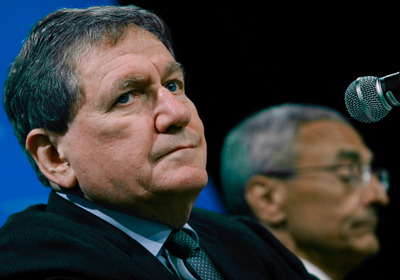 Katherine Tiedemann is a policy analyst at the New America Foundation/Counterterrorism Strategy Initiative and author of the AfPak Daily Brief. This post originally appeared on the AfPak Channel, a new joint venture between the New America Foundation and Foreign Policy to explain and analyze the conflict in South Asia.
I’ve just come from live-tweeting a conference with Amb. Richard Holbrooke, the U.S. special envoy to Afghanistan and Pakistan, and members of his interagency team hosted by the Center for American Progress. While there were certainly substantive issues discussed (the role of Iran, the upcoming presidential elections in Afghanistan, the state of the Pakistani Taliban post-Baitullah Mehsud), what caught my attention was a flippant quip by the ambassador.
Asked about how to measure success and progress in Afghanistan, Holbrooke remarked, “In the simplest sense, the Supreme Court test for another issue: We’ll know it when we see it.”
A universal head-desk rippled through the Twitterverse, with Foreign Policy blogger Mark Lynch tweeting “Feel reassured?” and Spencer Ackerman chiming in with “Is there alcohol here?” CAP’s Brian Katulis asked, “Will ‘we know it when we see it’ be convincing enough for the American people and the Hill, focused on econ and health care?” and FP’s own Josh Keating drew the parallel, “Holbrooke suggests AfPak success like pornography: ‘we’ll know it when we see it.'” Harvard’s Stephen Walt has added his two cents here.
Metrics in Afghanistan are hard. That much is obvious. There’s also potential peril in being held to standards that you may or may not be able to meet. But Katulis hit the nail on the head: “We’ll know it when we see it” is not a convincing enough argument for the public and policymakers. And since President Obama has made accountability a pillar of his Afghanistan policy, I’m hoping Holbrooke’s comment was just an attempt to be funny and nothing more than that.
National Security Advisor Jim Jones has reportedly “approved a classified policy document on July 17 setting out nine broad objectives for metrics to guide the administration’s policy on Afghanistan and Pakistan,” but another couple of months are needed to work out the details. One metric under consideration is an opinion poll to gauge how corrupt Afghans think their public officials are.
Gen. Stanley McChrystal, the top American commander in Afghanistan, has said that another measure of success is the number of civilians protected, not the number of Taliban militants killed (and indeed, CENTCOM is not publicizing the latter). Although that first metric is much harder to calculate, it shows the Obama administration’s focus on implementing counterinsurgency strategies in the Afghan theater.
Another yardstick of progress will be how legitimate the international community considers the August 20 presidential elections. With incumbent President Hamid Karzai’s supporters allegedly trying to buy voter registration cards and security concerns about safety on polling day rampant, to put it mildly, this is a challenge. Holbrooke said at the conference that he’s leaving it up to the media to determine whether the elections are legitimate, but one of his interagency team members, British diplomat Jane Marriott, clarified that the Independent Election Commission of Afghanistan will handle complaints.
You can check out my live-tweeting along with that of several other colleagues by clicking here.
— Katherine Tiedemann

Guest Post by Caroline Esser: Chavez — The Ultimate Combination of Politician and Performer
Dmitry Medvedev on the “Unprecedented Low Point” in Russian-Ukrainian Relations

98 comments on “Guest Post by Katherine Tiedemann: Holbrooke on Success — “We’ll Know it When We See It””