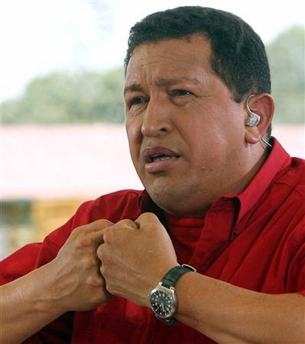 It seems that Venezuelan President Hugo Chavez’s political shrewdness and theatrical performances have reached a whole new level. Whether you like him or not, consider him a democratic leader or a dictator, there is no denying the fact that Chavez has a unique ability to wiggle his way out of anything and come out looking like the underdog.
In the past few months, Chavez has been involved in a number of controversial incidences, from the coup in Honduras to weapon sales to the FARC in Colombia. However, no matter the accusations, Chavez has repeatedly managed to turn the tables, rallying the leaders of Latin America behind him and implicating the United States.
For instance, rather than acknowledging that Venezuela was partially to blame for the coup in Honduras because he supported Zelaya’s call for a constitutional referendum, Chavez instead shifted attention to the United States, accusing the CIA of having orchestrated the military overthrow.
Chavez manipulated the situation to recast himself as the defender of victimized Honduras, the one who stood up as the David against the region’s Goliath rather than the one who fueled the regressive coup. While Chavez’s theory on the CIA has generally been dismissed, his maneuver was nonetheless a success as the accusatory murmurs directed towards Venezuela also dissipated and he was seen as standing up for Honduras.
Chavez performed a similar act more recently in response to the situation with the FARC in Colombia. At the beginning of August, new evidence surfaced confirming ties between Venezuela and the FARC. Not surprisingly, Chavez denied his support for and protection of the FARC despite the plethora of evidence to the contrary and only admitted to the fact that members of the FARC may occasionally cross the Venezuelan border.
However, being the politician-performer hybrid that he is, in addition to simply claiming innocence Chavez also created a diversion: the new military pact between the United States and Colombia.
In crafting this diversion Chavez withdrew (and then returned) the Venezuelan ambassador to Colombia, ended the subsidy of Colombian oil, and once again portrayed the United States as the enemy on which the region must focus its energy.
Chavez claimed that the new military pact “could start a war in South America” as “the Yankees are the most aggressive nation in the history of mankind” and Brazil, Ecuador, and Chile are all humoring his theory. With the leaders of these major countries turning their attention to the U.S. military bases, who has time to think about Venezuela’s questionable exchanges with a guerrilla insurgency in Colombia?
The question then arises of whether or not Chavez’s political feats will ever be too much for the people of Latin America to tolerate. The adversarial relationship with the United States that Chavez instigates and sustains seems to be somewhat craved by the region. His theatrics and constant figuring of Latin America as the victim of capitalist greed and U.S. imperialism have been an essential element of U.S.-Latin America relations as well as regional domestic politics for many decades now.
It is possible, however, that this dynamic will not be intrinsic to U.S.-Latin America politics forever. It is important to recognize that though Brazil, Ecuador, Argentina, and Chile tolerate Chavez, they are not fooled by his theatrics. On the contrary, they are shrewd politicians who understand that in humoring Chavez they can appease their leftist constituents and maintain their own power.
At the same time, this game could quickly turn from clever to dangerous. Supporting terrorist groups such as the FARC and endorsing constitutional referendums that undermine democratic institutions may eventually prove harmful to those now benefiting from Chavez’s friendship.
— Caroline Esser

14 comments on “Guest Post by Caroline Esser: Chavez — The Ultimate Combination of Politician and Performer”