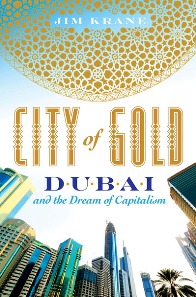 This is a guest note by Jim Krane, a former AP Persian Gulf correspondent. His new book on Dubai, City of Gold: Dubai and the Dream of Capitalism, is available here.
As Americans, Israelis and Palestinians continue their endless peace-jockeying, a more hopeful solution has emerged. It is a fresh Arab initiative that depends neither on America nor Israel.
It is Dubai.
Dubai, you must know, is the flashy Gulf city-state that is one of the seven United Arab Emirates. In my book, I argue that Dubaians, descended from illiterate Bedouin who faced starvation in the 1940s, have authored the most exciting Arab accomplishment in 700 years.
From nowhere, Dubai has mushroomed into a trading city-state on the lines of Hong Kong and Singapore, with sidelines in real estate and tourism.
Dubai accomplished all this without (much) oil, and without the help – or even recognition – of the United States. While Washington has been caught up prolonging the Israel-Palestinian conflict and starting a war in Iraq, Dubai was erecting one of the world’s most spectacular cities.
So, how can Dubai fix the Middle East? It certainly can’t do much to help Palestinians suffering under Israeli misrule. But that is the point. Dubai has succeeded in spite of the plight of the Palestinians, and in spite of what Arab leaders describe as US meddling that stymies their development. One of the favorite themes of Dubai leader Sheikh Mohammed is that his counterparts should stop bloviating about the Israelis and start serving the interests of their own citizens.
Dubai’s wild growth backs up Sheikh Mohammed’s message. His business-before-politics way is becoming a development model for the rest of the Arab world.
But wait, Dubai is in financial trouble. How could it be a role model?
Dubai’s downturn is temporary. Being one of the world’s most globalized cities, it couldn’t help but be infected by a global recession. The contagion kneecapped each one of its economic pillars: Shipping, logistics, tourism, and its binging real estate sector. Most of these pillars remain sound.
Dubai’s economic example isn’t widely understood in Washington. But it’s a good thing. Emulating Dubai could make Arab countries more stable and secure, along with the rest of us. For America, which has mistreated Dubai despite synergies with our interests, it’s a windfall.
If you remember, Dubai in 2006 bought US port operations and found itself vilified as a terrorist logistics center. Members of Congress now in the Obama administration — among them the senator who is now president — joined the Dubai-bashing. Well, it may turn out that this “terrorist logistics center” has one of the keys for fixing the Mideast’s terrorism problem.
The Dubai model is a mixture of social freedom, unbridled immigration, and raw capitalism. It is overseen by a government that is one of the world’s least democratic. This is no accident. Dubai avoids both elections and the Arab obsession with politics, especially the syndrome of feeling slighted by the West.
Dubai is pragmatic. It makes money doing business with Israel and Iran, countries shunned by other Arab states. The city’s finessing of simultaneous friendships with Washington and Tehran is as deft as it is precarious.
Dubai’s government wrings efficiencies using schemes from Harvard Business School and General Electric. Its use of strategic planning is a new concept in the Middle East. Dubai conceives developments, like no-tax business parks, and builds them exactly as promised.
In contrast with the surrounding police states, Dubai functions on the honor system. Alcohol is legal. Prostitution is tolerated. A nice example is the e-Gate scheme, which allows residents to use a biometric card to skip passport control. None of the neighbors has the confidence to replace state security with a smart card. Not Saudi Arabia, not Iran, not Israel.
Saudis and Iranians, especially, find a refreshing dignity in Dubai, a respect for their ability to make the right choice. “Friday you can pray, but Thursday night you might want to go to the bar,” says a Dubai-based Saudi. “It’s up to you.”
Dubai is certainly taking risks. But rulers from Morocco to Iran are already Xeroxing parts of the Dubai playbook and waiting to see how the more controversial approaches pan out. For some, it’s a matter of self-preservation: Dubai’s state-led development doesn’t involve elections. For others it’s a bid to stop the hemorrhage of bright citizens and cash fleeing to Dubai.
All of them ought to do more. Egypt, with its unemployed masses, could make use of Dubai’s incentives for foreign investment. Syria might adopt its free trade ways. Iraq and Israel could use a dose of its religious tolerance. And its Gulf neighbors might streamline their bureaucracies as Dubai has.
Of course, there are areas where neighbors emulate Dubai to their detriment. Dubai’s abusive “in-sourced” labor market is one. Real estate is another. One hopes Dubai’s property crash taught admirers what not to copy. And Dubai pays no heed to the environment. Thus Dubaians, with their monster 4x4s and chilled swimming pools, are the world’s most prolific polluters.
But overall, Dubai’s self-help mentality is the best hope for dragging this stagnant region into the global economic mainstream, with the accompanying stability and peace it implies. It’s time Washington took notice.
— Jim Krane

54 comments on “Guest Post by Jim Krane: Dubai, Not Obama, is the Mideast’s Best Peace Hope”