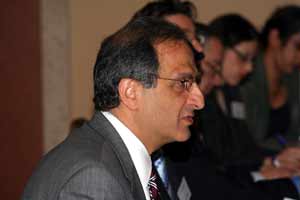 Arab American Institute President James Zogby just included me tonight on the distribution of his 14 April 2008 Washington Watch report titled “The Disconnect: How Arabs and Americans See 2008“.
I had to post this report tonight because he is just returning from Egypt and Kuwait to Washington — and has encountered the same intense interest and anxiety in our American election process there that I have found densely to be the case in Saudi Arabia — in both Riyadh and Jeddah.
Zogby’s comments about the substantial dismay that this part of the world has about America’s abilities to achieve its objectives is also exactly what I have found.

I’m going to post a large clip of Zogby’s commentary:

Elite opinion in the Arab world is closely following the U.S. elections – at least as closely and, in many instances, with more attention than many Americans are here at home. I received questions and comments, not only about the Middle East positions of each of the three remaining candidates, but also about the role of superdelegates, whether delegations from Michigan and Florida would be seated at the Democratic Convention, and whether or not Americans were really ready to elect an African American with a Muslim parent.
Now, I grant you, that these were conversations with elites (Arab journalists, professors and business men and women), but the frequency and the intensity of the questioning struck me as important. These are opinion shapers: they write, they speak, and they lead public opinion. There is another reason as well. Despite growing tensions in Iraq, Palestine and Lebanon; with Kuwait in the midst of a hotly contested Parliamentary election; and with Egypt facing municipal elections and a labor standoff that had grown riotous – the fact that the U.S. elections were being followed in such close detail is worthy of note.
To a worrisome extent, it became clear to me how divergent our election discourse is from concerns in the Middle East. For a time, the only Middle East issue being discussed in our campaign was that of Iraq, other crises roiling the region having been given short-shrift. But now, with Iraq having been displaced by the economy as American’s number one preoccupation, the electorate and candidates are focused largely on domestic issues. This is perfectly understandable, though still of concern.
At least among the elite audiences I addressed, despite the domestic challenges they were facing, they saw the American election as critical to their futures. In many ways they viewed this election as their own.
Make no mistake about it, real damage has been done by this administration’s foreign policy, and two immediate impacts are clear. First is the profound recognition that the last eight years have taken a toll across the Middle East. Many Arabs are gripped by a sense that they have lost control of their futures. They were forced to watch the unraveling of Iraq, the destructive neglect of Palestine and Lebanon, and the emboldening of extremists and Iran. This Administration’s adventurous and ill-conceived policies have unleashed dynamics that threaten to spill over into new conflicts.
Even more dangerous is the second effect, and that is the loss of hope that change is possible. Many of those with whom I spoke, especially those who know us, and even many of those who loathe our policies, want to believe we are not the country they see acting out across the region. They want to believe in America, and hope, as one put it, that “American will come back.” But, after policies pursued during the last several years, there is cynicism and, in some instances, a fear of actually hoping that America can play the role the region has long sought for it to play. One colleague said to me, “I studied in the U.S. I loved and learned from your country. But you’ve given peace a bad name, democracy a bad name – what else will you destroy?”
What emerges so clearly is how out of touch our political discourse has become from the real challenges with which the next president must be ready to deal “on day one.” First and foremost will be this loss of hope. And then there’s the fact that Palestine will still be suffering economic and physical strangulation, and Israel will still be facing the reality of violence. Lebanon will still be divided, and on the brink of conflict; and the people of Iraq will still be divided among themselves, lacking security and services, with one-fifth of their population displaced. The question that people across the Middle East are asking, and the question we as Americans should be asking of the candidates, is: “How, specifically, will you address these profound challenges facing our country’s security, and the security of a region we have so impacted?”
Listening to the candidates, however, we learn very little. Even when there are hints that one of the candidates may be more thoughtful or balanced in their approach, their campaign immediately rushes forward to douse that hope.