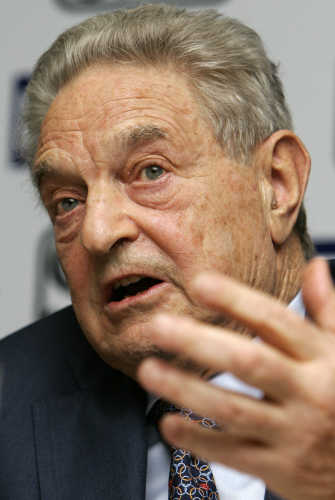 This is a guest post by Richard Vague, a Republican business person concerned about the economic consequences of the Iraq War. Richard Vague is Chairman of “American Respect” and authored Terrorism: A Brief for Americans.
In George Soros’s new book, The New Paradigm for Financial Markets: The Credit Crisis of 2008 and What it Means, you get three short “books” interwoven into one. The most central is an enhanced statement of his reflexivity investment theory, the second is an analysis of our current financial crisis complete with investment recommendations, and the third is a brief but vivid history of postwar financial markets intertwined with Soros’s own story. This book ranges widely, from the origin of conglomerates to a discussion of Enlightenment philosophy, with doctrines of falsifiability and radical fallibility mixed in for good measure, but is lively at every point along the way.
Soros calls his central economic theory the concept of reflexivity, and contrasts it against the rational expectations theory that he contends is utilized by most economists–as well as by most investment valuation models and synthetic investment instruments. In rational expectations theory, the economy can be studied like a natural science, inputs have predictable outcomes, markets are self-correcting and tend toward equilibrium.
Soros views this rational expectations theory as dangerous, primarily because of the certainty it presumes–and sees it as part of the reason we find ourselves with our current economic crisis. Soros instead states that investors’ perceptions and behaviors change outcomes and therefore have an inherent circularity, with the result that markets are often wrong and outcomes are always uncertain. Two examples: 1) people buy stocks in anticipation of future share prices, but those prices are contingent on their expectations, 2) lenders extend credit based on a belief in the value of underlying collateral, but the act of lending itself can diminish the value of that collateral.

Ultimately, Soros’s theory suggests a level of constant uncertainty that requires an equally constant vigilance on the part of investors, lenders, policymakers and regulators–especially as regards the level of leverage in the financial system. As relates to investment strategies themselves, given reflexivity, Soros suggests an approach that seeks to identify dislocations or “fertile fallacies”–the divergence between reality and the participants’ perception of reality– and invest to take advantage of those dislocations.
As regards our current situation, Soros’s pronouncements are dire. He states that we are in the midst of the worst crisis since the Great Depression (somehow I don’t recall the President saying that), and forsees inflation, and the continued weakness of the economy and the dollar, all contrasted against the strengthening of China, India and oil-producing countries. He sees our current situation as being the result of not one “bust” but two. The first is the housing bust and the second is the bust of a more structural nature that he calls the” longer-term super-bubble.”
This super-bubble theory contends that during the last several decades, the US and its corporations and citizens have essentially fully leveraged themselves across the entire financial system and therefore the entire system is on the brink of a breakdown. He contends that one outcome will be a structural diminishment, however large or small, of U.S. global financial leadership. During the writing of the book, Soros begins to make investments based on his new prognosos–with underwhelming results. We can only hope that he will keep us informed.
An analysis that Soros did not include that could have strongly supported his thesis is an analysis of basic population trends themselves. In the 60s, the nation could experience a bust and grow out of it because our population was growing rapidly. Furthermore, we were the center of the financial universe because we were the center of the population universe. We had more people than any developed country–and while China and India had greater populations, their per capita GDPs left them economically marginal.
Today, our population growth is low, so we have a harder time of “outgrowing” our busts. And while we are the still the third most populous country (and a distant third at that), now that China and India are rapidly increasing in per capita GDP and overall economic prominence, our economic hegemony is at risk. After all–the reason the U.S. dollar replaced the British pound as the world’s currency was that we grew larger than England.
While Soros invokes the Great Depression, the more relevant comparison may be to the post-Vietnam era of stagflation, which was the second worst economic period of the 20th century, and is more like today’s period than was the Depression — e.g., staggering levels of debt, inflation from financing a war, and the inevitable accompanying rise in commodity prices.
One other note–in spite of the blame Soros apportions for the housing crisis to policy leaders and complex financial instruments, I would submit that it took very little sophistication to detect the coming mortgage crisis. All that was required was to look at the total balance of mortgage loans outstanding–in reports readily and publicly available–which clearly showed an unprecedented and massive rise in mortgage debt. The tsunami was easy to track–the participants just rationalized it away.
Overall this book is an enjoyable, timely and important read from an extraordinarily successful investor. While others may debate his theories, this book is filled with useful information for the policy maker and investor alike.
— Richard Vague